Tokyo-based Quan, the Japanese startup producing characters like Betakkuma and Business Fish for messaging stickers, has announced that it will merge with Wwwaap (pronounced ‘warp’), an agency of cartoonists and influencers. The two companies will be merged by January of 2022 to establish a new company called Minto. Quan’s CEO Kazuhiro Mizuno will be appointed as the CEO of the new company while Wwwaap’s CEO Genta Nakagawa, Wwwaap’s director Nobuyuki Takahashi, and Quan’s director Jun Oagawa will join the new company’s director board.

In the U.S., influencing creators such as YouTubers, Instagramers, and Tiktokers are expanding their fan base all over the world, which has grown the creator economy up to over $104 billion US. Meanwhile, Japan’s creator economy is centered on two-dimensional content, mainly on manga and anime illustration. Webtoons originally from South Korea has recently spread into the Japanese market, which lets Kakao Japan operating the Piccolo manga app become valued over $7 billion US by riding on the wave.

We won’t go into detail about Quan’s business here because we’ve covered them many times while Wwwaap was founded in 2016 by Nakagawa, who started a manga editing team and an app marketing team at a major digital ad agency. With more than 250 creators, mainly manga and anime creators attracting fans through social network channels, the company has successfully monetized their content by making companies to use them for promotion. It claims that 80 to 90% of the manga illustrations used in Twitter ads in Japan are created by them. In other words, they can be called a multi-channel network for manga artists.

Nakagawa says,
In this industry, even if you are extremely talented (as an artist), you can’t make a living. While there are many people quitting, we have succeeded in monetizing their works to tell them how much we can pay them if they have a certain number of followers. We have over than 250 manga artists having 10,000 followers, and some of them are housewives earning 10 million yen ($8.8 million US) a year.
By joining forces, the two companies are expected to create several complementary relationships. It allows Quan to distribute Wwwaap’s creators’ works through Quan’s vast region-wide network in Asia while Wwwaap will be able to expand its sales channels. In addition to their own characters, Quon will be able to play a trader role in the distribution of third-party content.

Mizuno says,
Whether it’s webtoon or animation, there are so many small productions are working here. It is true that this has created diversity, but in order to be strategic and dynamic business, a certain level of scale is necessary. If we only had our own characters, we would not be able to cover all the demands form clients. After subsiding the pandemic, it would be especially difficult to differentiate ourselves from other competitors from the rest of the world. 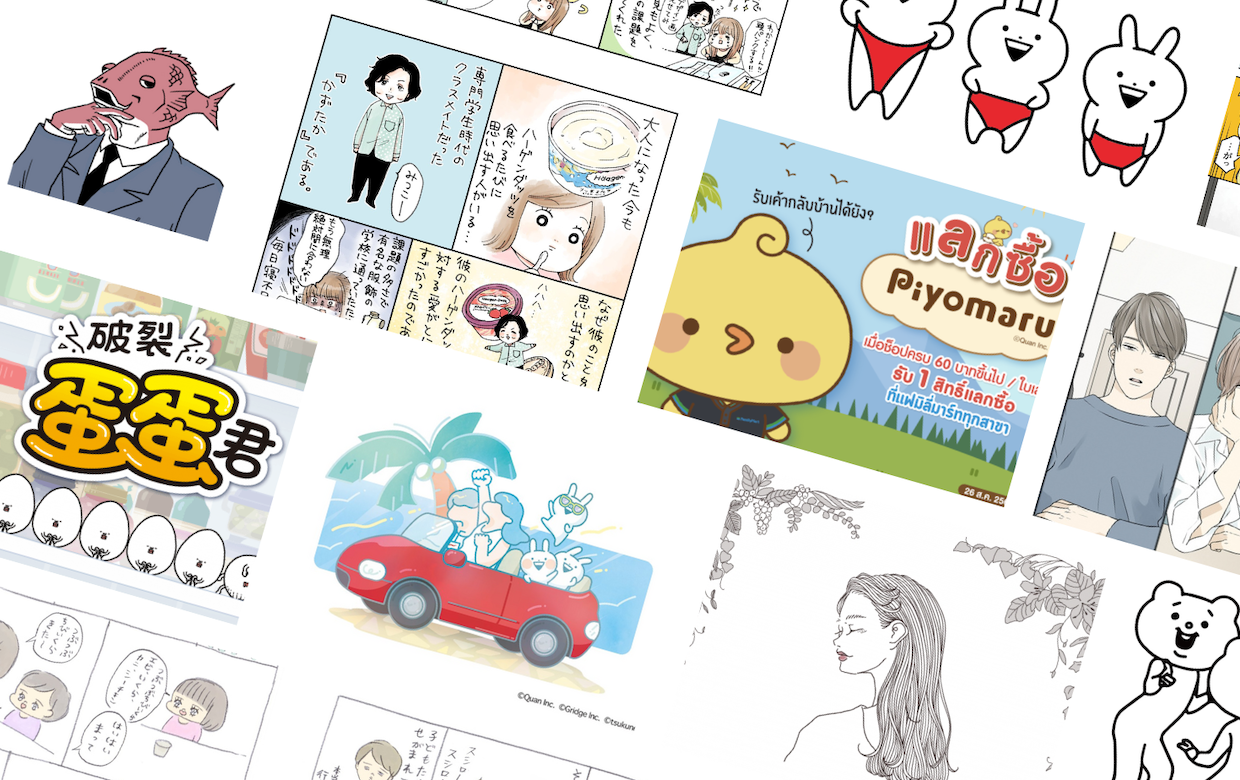 Some of characters and manga titles by Quan and wwwaap

Mizuno’s and Nakagawa’s different areas of expertise will complementary work. Despite several business models in hand Quan has been focused on monetizing by character merchandising as well as promotion use for companies in Asia after gaining popularity of unique characters through the use of free messaging stickers. Having successfully established his own business in Japan, Nakagawa expressed confidence in the business potential after the merger in terms of diversifying revenue stream in the region.