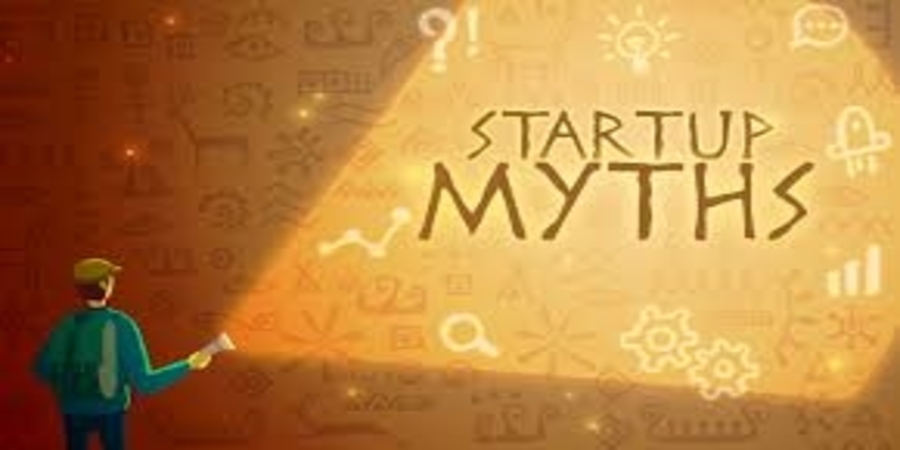 There are many things that revolve around in circles when we talk about a startup. Many of those are thereby related to the challenges, notions, and facts involved behind running or setting up a startup. With such challenges, come myths as well. Myths are the reason, why brooding entrepreneurs hesitate in giving their thoughts and ideas a physical state.

It’s already difficult to get a new business off the ground. Staying real, and separating fact from fiction can help entrepreneurs navigate the challenges of starting a new business while staying grounded.The world of start-ups is full of myths—untrue yet persistent narratives popularized by the news media, the entertainment industry, and politicians and often uncritically accepted by founders themselves. In many cases, these false beliefs actually serve to hold entrepreneurs back from their true potential or, worse, lead them toward failure.

In today’s blog, we’re busting some of the common startup myths and telling you what you really need to know.

Myth #1: It’s all about the idea (especially a shiny, new one)

You don’t have to have a completely new, innovative idea to succeed as a startup. Facebook wasn’t the first social media site and Google wasn’t the first search engine. It isn’t about being the first startup with the idea, it’s about doing it better and providing more value.

Additionally, while a lot of emphasis is often put on the idea behind the startup, the idea is only a small part of it. The reality is that startups also need to go beyond the idea to evaluate problem/solution fit, find product/market fit, gather feedback, and so many other things before an idea really takes flight.

Myth #2:A startup needs a big funding to start-off

This myth is known to be the most vital of all. Entrepreneurs tend to believe in this thought, but in fact, recent researches and surveys show that investors and venture capital fund only one per cent of all the startups. In order to burst the myth, one should adapt to the practice of bootstrapping, which allows maintaining full control of the startup strategies, avoiding time delays and energy spent to attract investors and retaining maximum equity.

Myth#3: Startup is not just another business

The common misconception about a startup is that it is like any other regular business. The core of a startup is creating something completely new even if to create a better application of an existing technology. A startup is an innovative experiment about which nothing is known for sure. It is an explorer’s ship charting an undiscovered territory.

The appeal of breaking out of the traditional, 40-hour work week draws many to the prospect of starting their own business. What lots of people find is that while they leave behind their old schedule and creative limitations, they exchange them for new demands. Sure, there will be more freedom in some respects, but entrepreneurism often requires great sacrifices. It can consume every part of your waking life; the work doesn’t end when the clock strikes 5 p.m.

Myth#5: Failure means you should give up

Nobody looks forward to failing, but even the most successful business owners have experience failure. How you manage through failure builds character and gives you the opportunity to learn lessons that will determine future success. Failure can actually be good for you as it teaches lessons that success cannot. In fact, some investors prefer to invest in companies run by people who have failed at least once. Failure can be discouraging, but don’t take it as a sign that you should abandon your dream. Brush yourself off, learn from the experience, and try again.

Myth#6: Founders get to be their own boss & do their own thing

There is a long list of people founders have to listen, and often answer, to. The biggest being your customers since paying customers are needed for your startup to succeed. In the early days, founders wear many hats including CEO, product manager, sales, marketing, customer support, and the list goes on. If you think you can only do what interests you, you should reconsider your decision to start a startup.

Culture is always vital to startup success, even in the beginning. We might even argue “especially in the beginning.” Company culture and core values (part of culture) are two things help identify what your company stands for and what you’re working towards.

When you clearly articulate company culture from day 1, you not only avoid other myths such as the never-ending work week, it also motivates team members and helps you acquire top talent who want to be part of what your company stands for.

It matters far less how many followers you have and far more how many of them actually purchase your product. Don’t give in to the temptation to expend all your energy on a short-term boost like amassing large amounts of followers on social media. Invest instead in giving thorough attention to your product or service, and then extending that attention to genuinely interested customers.

A great way to engage those interested customers in the wild west of social media is by reaching them through micro-influencers. Unlike celebrity influencers with their hundreds of thousands (and sometimes millions) of followers, micro-influencers have a couple hundred to a few thousand followers. Even though they have less popularity and aren’t as well known, they have a considerable advantage.

By taking advantage of a micro influencer’s more niche audience, you can target your product precisely to your desired audience.

Myth #9: Entrepreneurs are born that way

Many people assume that entrepreneurs are born that way — and that only people who have certain natural talents can be entrepreneurs. However, the truth is that almost anyone can become an entrepreneur if they can learn the necessary skills. True, some people may adjust to the demands of the role more quickly, but there’s no rule that says only certain types of people can found companies. Entrepreneurs may be gregarious extroverts or quiet introverts; they may be “big picture” thinkers or more focused on the details of executing an idea. Entrepreneurism is a learned skill, not a natural-born ability.

Startup success in general is far from a myth. But in order to achieve startup success, it is important that you understand the difference between startup myths and startup reality.

When you’re ready to launch your startup, keep these myths in mind.

We’re not saying overnight success isn’t possible, or that you shouldn’t be passionate about your business.

That said, make sure you are equipped with the reality of starting your own business: it takes time, hard work, and a healthy dose of grit.

If you’ve got the right mindset and reasonable expectations, there’s no reason why you can’t get started on chasing your business dream today.