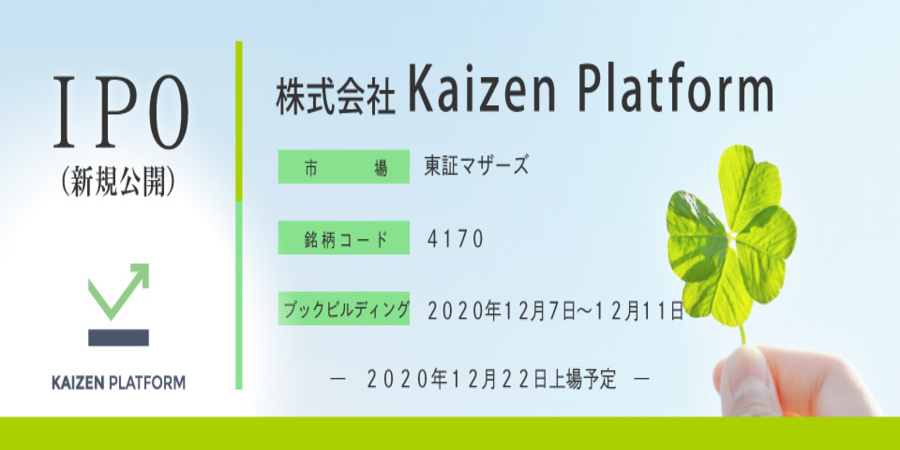 Japanese startup Kaizen Platform, offering website user interface improvement solutions, announced on Wednesday that IPO application to the Tokyo Stock Exchange (TSE) has been approved. The company will be listed on the TSE Mothers Market on December 22 with plans to offer 1,550,000 shares for public subscription and to sell 751,300 shares in over-allotment options for a total of 3,459,000 shares. The underwriting will be led by Mizuho securities while Kaizen’s ticker code will be 4170.

Its share price range will be released on December 3 with bookbuilding scheduled to start on December 7 and pricing on December 11. According to the consolidated statement as of December 2019, they posted revenue of 1.3 billion yen (about $12.5 million) with an ordinary loss of 249 million yen ($2.8 million). Based on the estimated issue price of 1,100 yen (about $10.6), the company will be valued at about 16.9 billion yen ($162 million).

Kaizen Platform founded a Delaware company with establishing its global headquarters in San Francisco as well its Japan branch in Tokyo in March to April of 2013, followed by launching a website optimization solution back in August of the same year. In addition to offering website optimization solutions, the company launched the Kaizen Video service as part of the Kaizen Ad business.

Kaizen Platform established a Japanese company and its subsidiary Kaizen Platform USA in April ofo 2017. During this process, the founding company was dissolved in a merger with the US subsidiary, In addition, the company established a joint venture with NTT Ad called DX Catalyst, making it an equity-method affiliate by acquiring its 49% stake in April this year.

In addition to helping clients optimize their websites, the company is now focused on creating client’s video clips utilizing existing content for affordable rates and fast turnaround. They disclosed several KPIs they have achieved as of Q3 this year: 772 companies, 16,480 registered users (clients and professionals), and 2,124,000 yen as ARPU (average revenue per user).