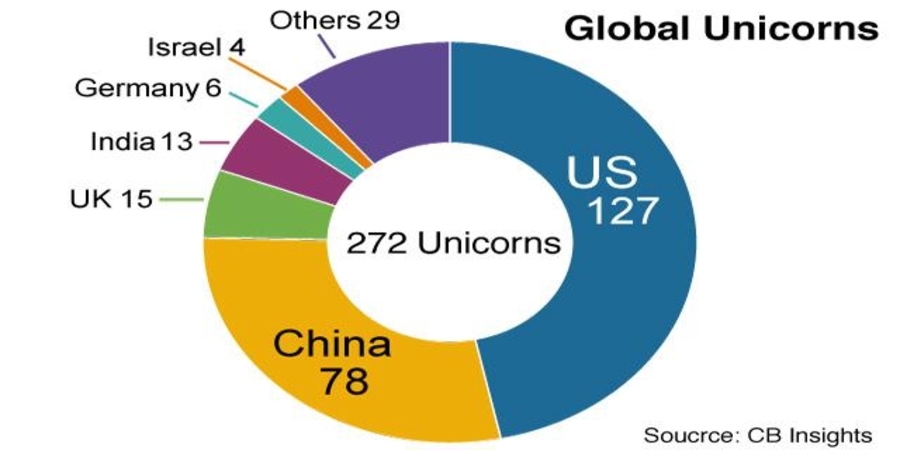 TOKYO – Hampered by cautious investors and a rigid corporate culture, Japan has produced just a handful of major start-ups. But there are signs that could be changing, industry insiders say.

Despite being the world’s third-largest economy, Japan is far behind the United States and China when it comes to producing “unicorns” — new comapnies valued at more than $1 billion in private funding.

But only four of these firms are Japanese, according to the latest list compiled by U.S. analytics platform CB Insights.

“Relative to its GDP, Japan should have at least 50 to 60 unicorns,” said Gen Isayama, head of World Innovation Lab, a California-based company that provides advice and capital to start-ups, with a focus on Japan.

“In Japan, innovation efforts have always been led by big corporations,” he explained, with banks “more willing to loan money to these corporates rather than to invest in start-up companies.”

Japan’s venture-capital market, worth around $4 billion last year, is much smaller than the United States’ at $137 billion and China’s at $52 billion, according to several studies.

But even Japan’s own SoftBank Group, which has invested heavily in tech firms, tends to fund overseas prospects, including Uber and Alibaba, and has barely touched smaller homegrown companies.

That lack of private capital for expansion can force Japanese start-ups to go public much sooner than their counterparts elsewhere.

But “if you go public too small you can never grow”, warned Isayama.

“In Japan, the standards for listing are very low, so there are a lot of tiny corporations, and many of them are satisfied with that,” said Takeshi Aida, founder and CEO of RevComm, a Tokyo-based AI start-up that hopes to launch soon in Southeast Asia.

The country’s shrinking population and stagnant economy mean “a lot of international companies are not really interested in Japan”, he told AFP.

That in turn can mean Japanese start-ups feel “protected” from outside competition, he added, lacking the drive to grow and expand.

It takes “a lot of guts” to break the mould in a society famous for conformity, Isayama said.

Aida chuckled when he recalled his student days: “I was very strange compared to other people. I talked too much, I spoke my mind.”

Takafumi Kurahashi, operational director at digital start-up SmartHR, said he realized the cultural differences growing up between Japan and the United States.

“If you show off you’ll be pushed back,” he said of his experience at a Japanese high school. “So I learned the hard way, by getting pushed back.”

Despite the difficulties, experts see reasons for optimism.

“Manufacturing, heavy-industry driven corporations have realized they cannot innovate in the way they used to”, Isayama said, and they are in a position to invest in start-ups that can fill that gap.

Corporate investors are also gradually realizing it is better to give start-ups space to find their wings, rather than trying to control them, he added.

Isayama said government support for start-ups is also improving, with officials seeking advice from experienced investors on which firms to support.

And innovators can take inspiration from the success of companies like Mercari, an e-commerce platform for second-hand goods founded in 2013, which has been downloaded more than 50 million times in the United States.

“When Mercari went public, it was huge news for us,” said Kurahashi. “We are more determined to aim high and make history.”