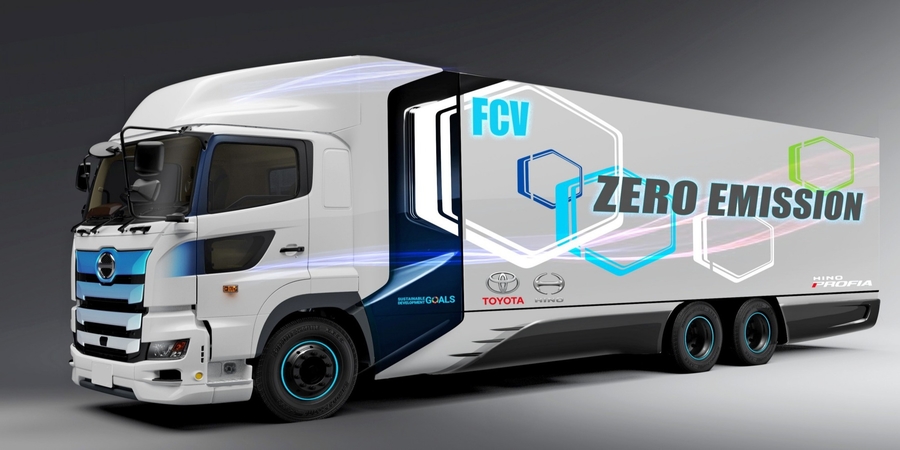 Competition in the fuel-cell electric truck space continues to heat up, with the Oct. 5 announcement of a Class 8 tractor to be developed jointly by Hino Trucks and Toyota Motor North America. This effort builds on technology previously developed by Toyota under Project Portal, which got under way in 2017.

The two companies (Toyota is Hino’s parent company here in the U.S.) will leverage the Hino XL Series chassis, unveiled in 2018, with Toyota’s proven fuel cell technology to deliver exceptional capability without harmful emissions, Hino says. This collaboration expands on the existing effort to develop a 25-ton fuel cell electric truck for the Japanese market, which was announced earlier this year.

The fuel cell truck project is part of a new initiative Hino calls Project Z. Announced along with the fuel cell truck, Project Z is the company’s development path to zero-emissions battery-electric vehicles, ranging from Class 4 to Class 8.

“A fuel-cell-powered version of the Hino XL Series is a win-win for both customers and the community. It will be quiet, smooth and powerful while emitting nothing but water,” said Tak Yokoo, senior executive engineer at Toyota Research and Development. “Toyota’s 20-plus years of fuel cell technology combined with Hino’s heavy-duty truck experience will create an innovative and capable product.”

This new truck will build off the work Toyota began in 2017 with Project Portal, which saw a Class 8 tractor equipped with two Toyota Mirai fuel cell stacks hauling freight from the ports of Los Angeles and Long Beach to rail yards and warehouses across the Los Angeles basin.

“We’ve had Project Portal underway since 201[7], where we have been developing the fuel cell system for Class 8 trucks,” said Yokoo in a video presentation of the Project Z launch event from Long Beach, California. “We’re very confident and comfortable saying it is scalable up to Class 8. We are ready to bring this new truck with a zero-emission fuel system, soon. And I’m excited to say that we will be building our first truck next year, sometime in the first half of 2021.

“It will be coming soon, but it’s not soon enough for the market,” he added. “The market needs those zero emission trucks now. Today.”

Hino and Toyota are also collaborating on an 80-passenger fuel cell transit bus destined to be deployed at next year’s 2021 Summer Olympics in Tokyo.

Toyota began developing fuel cell systems for passenger cars more than 20 years ago, Yokoo said. “We brought our first fuel cell car to the US in 2015 and as of the end of 2019, we have sold more than 6,000 cars.”

“Expanding upon our proud heritage of the Hino powertrain, Toyota Fuel Cell Technology offers our customers a commercially viable, extended range, zero-emissions vehicle in the near term,” said Glenn Ellis, Hino’s senior vice president – customer xxperience. “Hino shares a common focus with Toyota when it comes to durability, reliability, and innovation with the customer at the center of design which makes this collaboration a game-changer.”

In addition to the Hino XL fuel-cell Class 8 tractor, the ZEV products displayed during the live virtual event on Oct. 5 included:

For the battery-electric vehicles, Hino will look at both central drive motors and e-axles.

Project Z will consist of demonstration vehicles in the first half of 2021, customer demonstrations in 2022, and production prior to 2024, according to the company.

“Our holistic approach to working with technology leaders like Toyota, Hexagon Purus and Xos will result in a sustainable, low cost product line up that will meet the needs of our customers as our industry moves forward to zero-emission vehicles,” Ellis said, noting that the SEA Electric model showed is commercially available today.