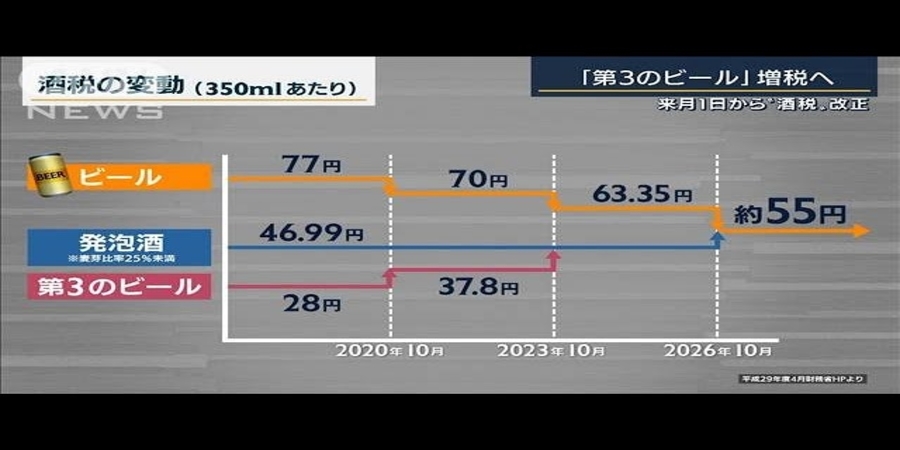 TOKYO – A range of price changes will take effect in Japan starting Thursday, from alcoholic beverages to minimum wages, as revisions were made to the tax and social welfare systems.

With the revised tax rates, the retail prices of wine, tobacco and low-priced beer-like drinks, made from malt alternatives or a mixture of spirits, could be higher.

The tax for what is known in the country as “third-category beers” will rise 9.8 yen per 350 milliliters and that for wine will be 7.5 yen higher for a regular-sized bottle.

But normal beer of the same quantity will be taxed 7 yen less and Japanese sake, which is typically sold in 1.8 liter-bottles, will be 18 yen cheaper.

Japan Tobacco’s 224 product retail prices will be higher by between 10 yen and 100 yen per packet. Philip Morris and British American Tobacco will also introduce price increases of between 20 yen and 50 yen, and 10 yen and 60 yen, respectively.

Among changes in the welfare and health care sectors, people aged 65 or older will be eligible for priority vaccination against influenza, while rotavirus vaccination will basically be free for infants born in and after August.

Of Japan’s 47 prefectures, 40 — not including Hokkaido, Tokyo, Shizuoka, Kyoto, Osaka, Hiroshima and Yamaguchi — will raise minimum wages by between 1 yen and 3 yen, in steps.

Financial help for low-income households, such as covering their electricity bills, will be reduced.

On the other hand, unemployment allowances granted to people who leave jobs for personal reasons will be disbursed after two months rather than three, which the government says will help create a job market that makes it easier for people to switch careers.

Television viewing fees for NHK, formally known as Japan Broadcasting Corp, will be reduced by 35 yen per month to 1,225 yen, while those for a package including satellite broadcasts will be 2,170 yen, down 60 yen.

Also from the beginning of October, Tokyo will be added to the government’s Go to Travel campaign, a subsidy program for domestic tourism aimed at reviving consumption following a downward trend in novel coronavirus infections.