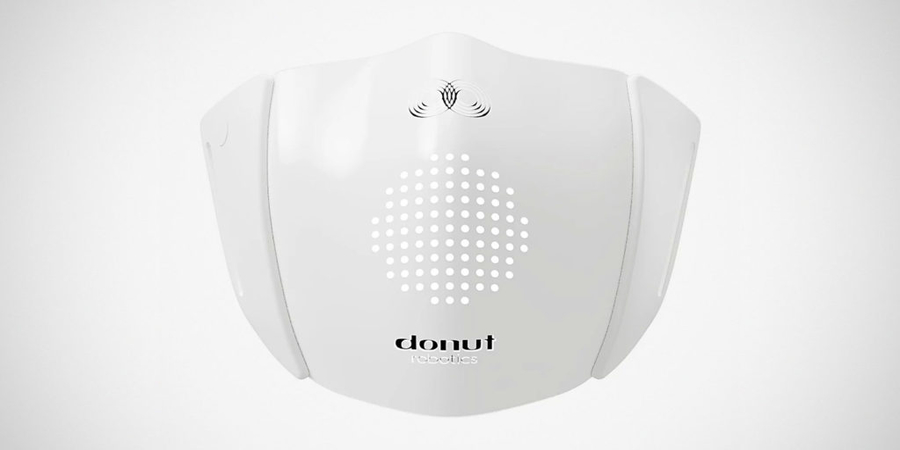 The white silicone C-mask fits over standard face masks and connects via Bluetooth to a smartphone and tablet application that can transcribe speech into text messages, make calls, or amplify the mask wearer’s voice.

As we all know, the Covid-19 pandemic made face masks an everyday essential till that disease go away , Japanese startup Donut Robotics spotted an opportunity during this period. They developed a smart mask, a high technology up-gradation to standard face covering, created to follow social distancing measures more easily and to make communication with others.

In conjunction with an app, the C-Face Smart mask can copy dictation, amplify the wearer’s voice, and even the app can translate speech into eight different languages.

The cutouts on the front are important for breathing, so the smart face mask does not provide you protection from the Coronavirus. Taisuke Ono, the CEO of Donut Robotics, describes that it is designed to be worn over a standard face mask.

The smart mask is manufactured from Silicone and White plastic, and it also has an embedded microphone that links via Bluetooth to the smartphone of the wearer. Moreover, it can translate between English, Japanese, Indonesian, English, Korean, Vietnamese, French, Spanish and Chinese.

In 2014, Donut Robotics initiated their work in a garage in Kitakyushu city located at Fukuoka prefecture. Furthermore, Ono co-founded the firm with Takafumi Okabe, an engineer, with the vision to change the world with mobile and small communication robots.

Donut Robotics’ Cinnamon robot is designed and developed to provide tourists with effective information and help them to navigate the airport . The Cinnamon Robots was one of four translation robot prototypes selected by the project in 2016.

Haneda Robotics Lab says Cinnamon beat the competition because of its appealing visuality and user-friendly design, and because the translation software performed well in noisy environments.