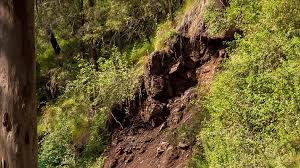 TOKYO : The trend reflected the rise in torrential rainfall due to global warming, said the white paper on land, infrastructure and transport, which called for restrictions on the use of at-risk land and relocating residents to safer areas.

An average of almost 1,500 landslides rocked Japan every year during the past decade, marking an increase of almost 50 percent on the previous 10 years, according to a government report endorsed by the cabinet.

Downpours of 50 millimeters or more per hour in the past decade were recorded 1.4 times more frequently than between 1976 and 1985.

In 2018, Japan was hit by a record 3,459 landslides, triggered by torrential rain in western Japan and a major earthquake in Hokkaido, northern Japan. Last year, Typhoon Hagibis and other torrential rainfall triggered 1,996 landslides.

Japan this month made legal moves to tighten restrictions on the development of red-zone areas, where residents’ lives are at greatest risk in the event of landslides, and to introduce a system for municipal governments to offer relocation, the report said.