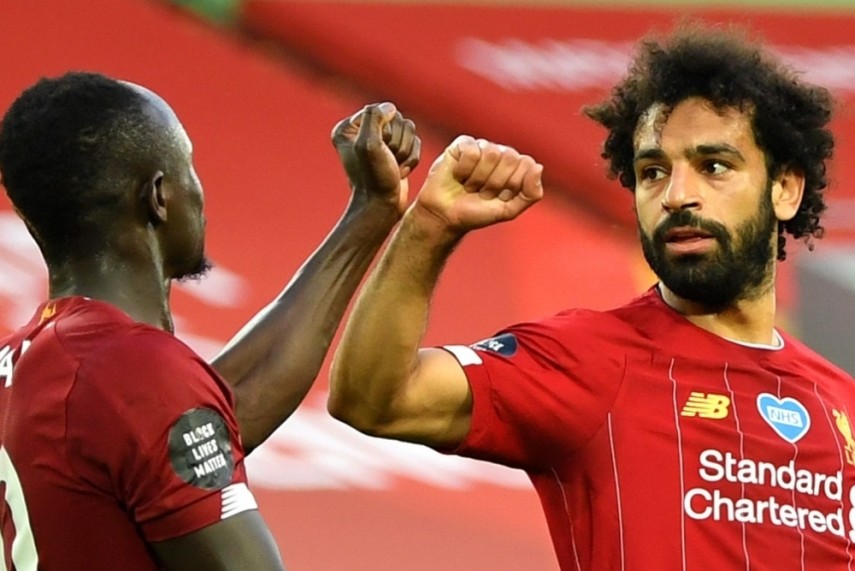 LIVERPOOL : Liverpool moved to the brink of celebrating a first league title in 30 years with a 4-0 win over Crystal Palace on their return to Anfield behind closed doors on Wednesday.

Jurgen Klopp’s men will be champions on Thursday should Manchester City fail to win at Chelsea or with a point when they face City in their next outing on July 2.

Trent Alexander-Arnold, Mohamed Salah, Fabinho and Sadio Mane scored the goals as Liverpool opened up a 23-point lead at the top of the table.

Before kick-off “You’ll Never Walk Alone” boomed around a deserted Anfield, but without the usual accompanying chorus of nearly 55,000 fans.

Instead, banners and flags were draped over The Kop on the night Liverpool could have clinched the title had they won the Merseyside derby on Sunday.

Klopp was able to bring back Salah and Andy Robertson from that 0-0 draw at Everton and the champions-elect were much more like their old selves as Palace struggled to keep the score respectable.

The Eagles arrived at Anfield on the back of four consecutive league wins, but any attacking threat they posed was greatly diminished once Wilfried Zaha limped off injured after just 15 minutes.

Zaha’s absence allowed Alexander-Arnold free reign to attack down Liverpool’s right but it was from a set-piece the England international truly showed his class.

The right-back curled a sumptuous free-kick beyond the grasp of Wayne Hennessey to settle any nerves on 23 minutes.

Jordan Henderson then struck the post and Virgil van Dijk’s follow-up effort was blocked on the line by Joel Ward as the hosts began to find their rhythm.

Salah’s dynamism was badly missed in a static performance at Goodison and the Egyptian showed the clinical touch Liverpool lacked on Sunday to control Fabinho’s excellent ball over the top and slot home his 21st goal of the season just before half-time.

Liverpool’s long wait for a title has been extended by three months due to the unprecedented coronavirus shutdown.

That wait could take just one more day, another week or slightly longer should City show their pride to win the battle of the top two next week.

However, there remains no doubt the title drought is coming to an end and as dominant a display from Klopp’s men as any this season underlined why they will be fitting champions.

Fabinho’s piledriver set the seal on a 23rd straight league win at Anfield as the Brazilian drilled home from fully 30 yards.

The front three of Salah, Roberto Firmino and Mane have been key to Liverpool’s rise over the past three years under Klopp from struggling just to qualify for the Champions League to winning that competition last season and now running away with the English top-flight.

All three combined beautifully for the fourth 20 minutes from time as Firmino fed Salah, whose pass picked out the run of Mane and the Senegalese slotted into the far corner.