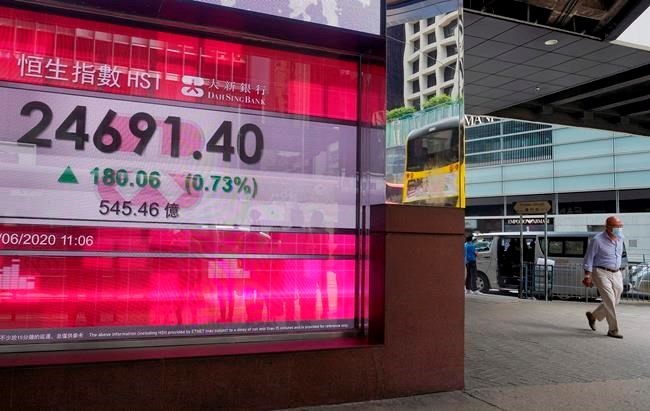 Asian shares were mixed Wednesday following another rally on Wall Street, tempered by fears over surging coronavirus cases in various parts of the world.

Analysts are warning that, despite recent market rallies, there is little reassurance infections won’t keep spreading, given the growing numbers in some parts of the U.S., Brazil and Asia.

“The nuance though is that the recovery falls short of being entrenched,” said Hayaki Narita of Mizuho Bank, adding trade contractions for various countries this year are expected to be the worst ever.

Prakash Sapal, senior economist for ING, said the focus is slowly shifting back to the COVID-19 pandemic from optimism about a rebound from loosening lockdown restrictions.

“The recent acceleration in infections has rekindled concern that governments will be forced to shut down their economies once again, squandering the chance for the much-hoped-for economic bounce back,” he said in a report.

On Wall Street, the S&P 500 rose 0.4% and is on pace for its third straight monthly gain. The Nasdaq composite, which is heavily weighted with technology stocks, climbed to an all-time high for the second day in a row. Bond yields rose, another sign of increasing confidence in the economy.

Health care stocks and companies that rely on consumer spending were also among the big gainers, while safe-play sectors like real estate and utilities stocks fell.

Investors have been focused on the prospects for an economic recovery as more businesses reopen after being shut down due to the coronavirus pandemic. Encouraging economic data, including retail sales and hiring, have helped stoke optimism that the recession will be relatively short-lived.

Wall Street has grown confident that the Federal Reserve and Congress are prepared to continue providing a historic amount of support to the market and economy, said Sam Stovall, chief investment strategist at CFRA.

“All of the negative news has basically been built into share prices,” Stovall said.

The market has continued to climb, despite bouts of volatility, even as a rise in new coronvairus cases in the U.S. and other countries clouds the prospects for an economic recovery.

The World Health Organization said over the weekend that the pandemic is still in its ascendancy. The U.S. is seeing rapid increases in cases across the South and West and has more than 2.3 million cases and 120,000 confirmed virus-related deaths, according to a tally by Johns Hopkins University.

Its global reckoning puts the total number of cases worldwide at more than 9.2 million, with more than 476,000 deaths.

On Tuesday, Federal health officials told Congress to brace for a second wave of coronavirus infections in the fall and winter of this year.

Investors have been placing more weight on economic data releases that suggest economies that have reopened are making strides to emerge from a deep recession. Further updates on the U.S. economy are expected toward the end of this week, when the government will issue data on consumer spending, weekly unemployment aid applications and durable goods orders.

In energy trading, benchmark U.S. crude oil slipped 1 cent to $40.36 a barrel in electronic trading on the New York Mercantile Exchange. It fell 9 cents to $40.37 a barrel Tuesday. Brent crude, the international standard, rose 12 cents to $42.75.