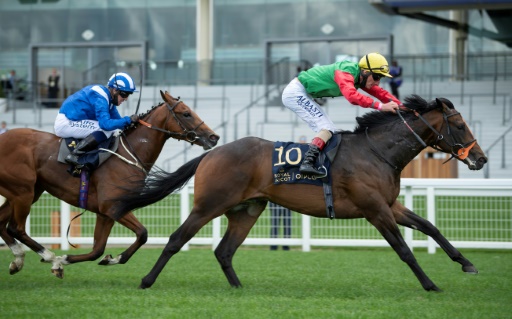 LONDON : Ascot took a financial hit by putting on Royal Ascot behind closed doors and lessons were learned for the Epsom Derby and Oaks, the next highlights of the racing calendar.

Royal Ascot went ahead without its crowds and well-dressed punters but the final winner’s name, Who Dares Wins, seemed apt as most commentators concluded it had been a success in difficult circumstances with stringent health constraints.

A winner for Queen Elizabeth II, Stradivarius’s third successive Ascot Gold Cup and Nando Parrado — at 150/1 the longest-priced winner in Royal Ascot’s history — were some of the on-track highlights.

The organizers of the Epsom Derby and Oaks have won permission to stage both races without spectators on July 4 as part of a seven-race card.

AFP asked personalities from different walks of racing life what Ascot had proved to them, as England emerges from the coronavirus lockdown.

Ascot director of racing Nick Smith and his team added six races to the five-day program and set up a super Saturday with three Group One races, switching two of them from earlier in the week.

He said: “It has been a great, if strange week. Running six extra races seemed like the right thing to do in the environment we faced and were well supported

“Two wins for lady jockeys (Hayley Turner and Hollie Doyle) and a win and three seconds for America were amongst the many landmarks of the week.”

Richard Morecombe, co-founder of Chelsea Thoroughbreds which has around 20 horses with a limit of 10 investors per horse, says potential owners may be put off buying horses if they are not allowed on the racecourse.

It is not all doom and gloom though.

“What would be good news going forward is if the extending of the program at Royal Ascot is something they would keep,” he said. “By doing so it gives owners like us the opportunity of a genuine chance of a Royal Ascot winner. I don’t think it dumbs down Ascot by having extra handicaps. Goodwood and York have non-championship races and they work very well.”

Mark Johnston admitted he had a frustrating week but at least came away with his first win in the Royal Hunt Cup. The 60-year-old — the all-time record holder for training winners in the United Kingdom — is a firm advocate of allowing owners back onto the racecourse.

“The only lesson we can take forward is, could we have more people at the racecourse? And that stable staff can stay overnight.”

Although Johnston was himself laid low with coronavirus for a fortnight earlier this year, he believes the risk to staff being at a course is low.

“It is all about perception but the risk of catching it (COVID-19) is so negligible there is no reason not to have more people on the racecourse,” he said.

Jim Crowley rode a career-best six winners at a meeting where you would “take your hand off” to have just one.

The 34-year-old Englishman was only denied top jockey honors by Frankie Dettori. The Italian’s last-day treble saw him also finish on six and pip Crowley due to more placed finishes.

Crowley said he can’t wait for spectators to return, even if some of his rides such as top sprinter Battaash — who won the King’s Stand Stakes after finishing runner-up in 2018 and 2019 –benefited from the lack of them as he “can boil over.”

“I will say that a lot more people tuned in on television,” he said, referring to the one million who watched Stradivarius win the Gold Cup. “A lot of the people who go racing never see a race as their priority is the social aspect. Those who tuned in did so for the right reasons.

“People should be watching the racing and hopefully the viewers included a new audience.”

William Woodhams, CEO of Fitzdares, had a rollercoaster week — just one pound was laid on his firm’s books for Nando Parrado on Saturday but then they took a hit in the next race.

He said France offers hope for getting people back onto the track.

“I believe Glorious Goodwood (July 28 – August 1) will allow owners back and that would be a wonderful thank you for them keeping the industry afloat through the lockdown. It would be a refreshing change for them from being interviewed via Zoom in the corner of their kitchen.”