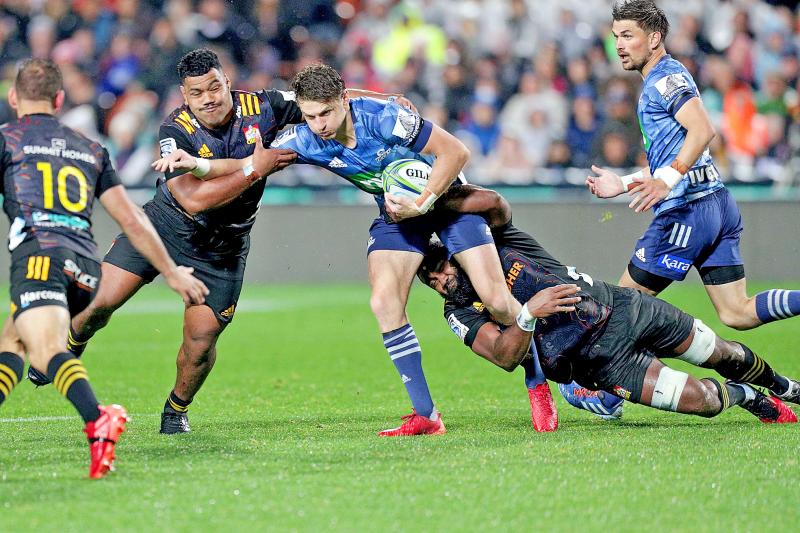 HAMILTON, New Zealand : The Auckland-based Blues scored two tries in pouring rain to beat the Hamilton-based Chiefs 24-12 in a Super Rugby Aotearoa match played in front of a capacity crowd on Saturday.

The teams were rarely separated by more than a point until midway through the second half when All Blacks star Beauden Barrett, playing at fullback for the Blues, kicked a drop goal and then a penalty.

Winger Mark Telea followed up with an outstanding try to earn the Blues a fifth win in a row this season, and their first in Hamilton for nine years. It also helped them stay unbeaten in Super Rugby Aotearoa.

“It’s pretty cool when you can look up and see the back three ranging out wide, especially in slippery conditions,” Blues captain and second-rower Patrick Tuipulotu said. “I think that’s the best part of being in this Blues squad … we can score from anywhere.”

The match, played in front of 24,000 fans, featured another starring performance from Blues back-rower Hoskins Sotutu, who scored the only try of the first half. The blockbusting No. 8 carried the ball regularly and effectively and was also a steady supplier of lineout ball.

The Blues were heavily penalized but managed to eke out a 10-9 lead by halftime, even after losing flanker Dalton Papali’i to a yellow card immediately before the break.

The difference between the teams was Sotutu’s 14th-minute try, which came after he won a lineout to set up a series of attacking phases.

The teams were still separated by a point, 13-12 after 64 minutes, when Barrett moved up to first receiver and kicked a drop goal which gave the Blues breathing space. He added a penalty four minutes later and Telea’s 71st minute try, from a long buildup in which Tuipulotu featured prominently, ruled out any Chiefs comeback.