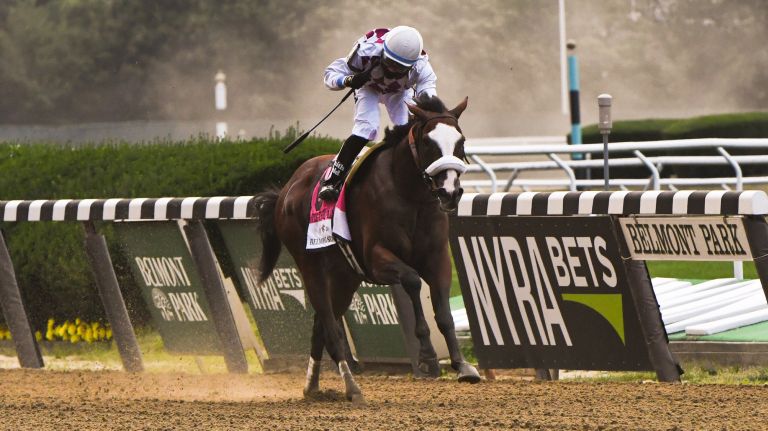 NEW YORK : Tiz the Law richly lived up to his favorite’s billing, sweeping to victory in the Belmont Stakes on Saturday to launch a topsy-turvy Triple Crown year.

Trained by 82-year-old Barclay Tagg and ridden by Manny Franco, Tiz the Law became the first New York-bred horse to win the Belmont since Forester in 1882.

There was no roar to greet him as he surged across the finish line since the cavernous grandstand at Belmont Park in Elmont, New York, stood empty amid ongoing coronvirus restrictions.

It was the COVID-19 pandemic that saw the Belmont, usually the final race in U.S. flat racing’s flagship treble after the Kentucky Derby and Preakness, run first for the first time in history.

The race, long dubbed the Test of the Champion, was also shortened from its usual 1 1/2-mile distance to 1 1/8 — a nod to the difficulty of getting the 3-year-old contenders in proper condition for the longer distance in the pandemic-disrupted year.

Tiz the Law broke smartly from the eighth post in a field of 10 and settled into third place behind pace-setter Tap It to Win down the backstretch of the sweeping Belmont track known as “Big Sandy.”

Franco made his move in the lone turn, surging ahead on the outside and powering home ahead of the Todd Pletcher-trained Dr Post with Irad Ortiz aboard. Max Player, trained by Linda Rice and ridden by Joel Rosario, was third.

The Triple Crown will continue with the Kentucky Derby, usually held on the first Saturday in May, and now rescheduled for September 5 at Churchill Downs. The Preakness at Pimlico, usually the middle jewel of the Triple Crown, is scheduled for October 3.