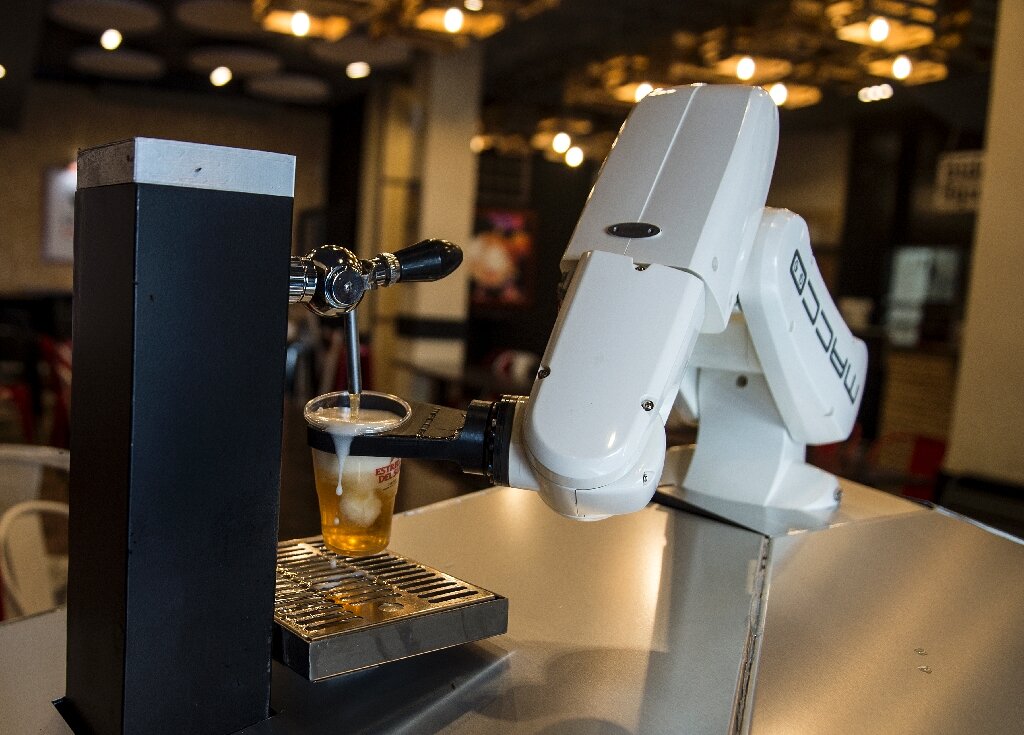 PARIS : It may be a mechanised arm pulling beers in a Seville bar, a dog-like dispenser of hand sanitiser in a Bangkok mall, a cooler on wheels that delivers groceries in Washington, or a vaguely humanoid greeter at a Belgian hospital that also checks you are not running a fever.

When human contact needs to be kept to a minimum, robots can save lives and factories. But when the coronavirus crisis is over, will they amplify job losses?

These are some of the new jobs that robots have taken on as lockdown measures have seen humans confined to their homes.

“The moment there is a threat for humans, you should send a robot,” said Cyril Kabbara, co-founder of the French start-up Sharks Robotics.

Its robot Colossus helped save Paris’ Notre Dame Cathedral when flames engulfed its roof in 2019, and has been adapted to help remove lead that contaminated the site.

“Four or five years ago, when we went presented the Colossus, they laughed at us. The firefighters said: ‘These guys are going to take away our jobs’,” said the entrepreneur.

But the Colossus has since been successfully integrated into the Paris and Marseille fire services.

“The more we advance, the more the resistance falls away,” he said.

It is not just in the hygiene and medical spheres where robots have made advances.

“This crisis has demonstrated that you have to have a capacity to continue activity even when a health or another type of crisis strikes,” said Kabbara.

“We’ve had quite a few manufacturers tell us that the robots allowed them to continue operating. And if they hadn’t had them, they’d be at a dead stop.”

While owners like robots as they can keep operations running, workers can see them as a risk to their jobs.

Rightly so, according to Brookings Institution researcher Mark Muro.

“Recent research suggests that the deepening recession is likely to bring a surge of labour-replacing automation,” he said in a recent note for the Economist Intelligence Unit.

He pointed to China, a country which is rapidly installing industrial robots, with 650,000 going online in 2018 alone, and which lost 12.5 million manufacturing jobs between 2013 and 2017.

The country has seen an explosion in “robophobia” during the coronavirus crisis, according to a study by Spanish university IE.

While only 27 percent of Chinese supported limiting automation before the crisis struck, the figure has doubled to 54 percent.

The Chinese are now close to the French, who at 59 percent, are the most hostile to automation.

The study also revealed that hostility towards automation was tied to age and education, with the younger and less educated people most hostile towards robots.

“Historically, technology has created a lot of jobs as well, but you see less of that happening in the digital world,” said Frey.

He pointed to automakers or manufacturers like General Electric still employing many workers even after adopting automation.

“The leading techs of today are not creating so many jobs, apart from Amazon,” he told AFP.

With the rapid progress made in artificial intelligence, white collar workers are increasingly at risk from automation, experts warn.

“No group of workers may be entirely immune this time around,” said Muro.

That is not to say that high levels of automation cannot coexist with low unemployment. Singapore and South Korea are at the top of the rankings for deployment of robots compared to the size of the workforce and yet they enjoy low unemployment.

Nevertheless, Frey warns of rising anxiety about robots stealing jobs once the immediate fear of the coronavirus recedes.

But he doubts a worldwide movement against automation will gain traction as job losses are a local phenomenon and tend to happen in regions that have long suffered from manufacturing jobs disappearing.