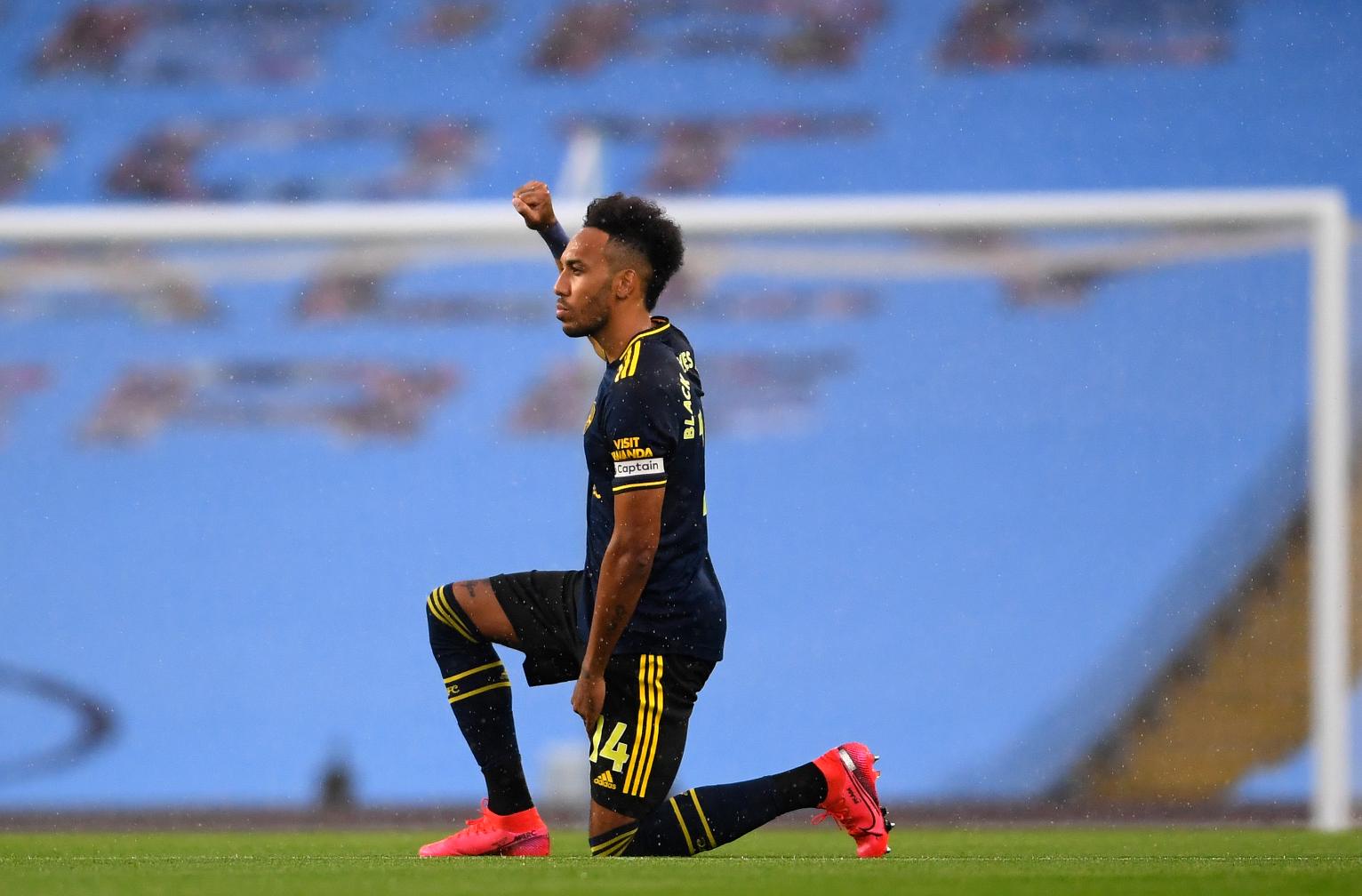 MANCHESTER, England : English soccer’s longest suspension since World War II came to an end Wednesday, bringing some relief to a nation deprived of its most popular sport during one of the world’s worst coronavirus outbreaks.

The Premier League, the richest soccer league in the world with massive worldwide viewership, was suspended on March 13 after Arsenal manager Mikel Arteta tested positive. The virus had been rapidly spreading from Italy and Spain to the rest of Europe but it took soccer authorities to halt play, a move that has been credited with saving lives by keeping hundreds of thousands of fans from being infected in, or around, stadiums.

After a 100-day wait, the first game — between Birmingham club Aston Villa and Sheffield United — was a 0-0 draw inside a virtually empty Villa Park stadium. The most memorable moment came right after the opening whistle, as the game began with every player taking a knee in a tribute to George Floyd, who was killed by a policeman in Minneapolis last month. All the players also had had their names on their shirts replaced with “Black Lives Matter.”

Before the game, there was a minute’s silence to honor those who have died in the pandemic.

The resumption comes as Prime Minister Boris Johnson’s Conservative government faces criticism for not ordering a nationwide lockdown until March 23 and for easing restrictions in England too soon given still-high levels of new cases and deaths. The U.K. as a whole has recorded more than 42,000 coronavirus-related deaths.

“I thought about the night I started to have some symptoms, how serious that was,” Arteta said in a pre-match virtual news conference. “It had to be reported because I could put at risk a lot of people.”

After months of planning, the Premier League is back — even though the matches will take place in empty stadiums, just like Germany’s Bundesliga, which returned last month.

“All but five countries will be airing tonight’s games, underlining football’s global reach and the soft power of U.K. sport,” Culture Secretary Oliver Dowden said at the government’s daily briefing an hour before the games.

“There’s no doubt that this is a hugely symbolic moment, an important step forward in our careful journey back towards normality,” he added.

League leader Liverpool, which holds a massive 25-point lead over Man City and is close to winning its first league title in 30 years, will play its first match Sunday at city rival Everton.

“Obviously it is going to be an odd experience without fans,” said Premier League chief executive Richard Masters. “The Premier League won’t be back with a capital ‘B’ until fans are back.”

The opening round of matches will honor the Black Lives Matter movement, which spread to Britain and the rest of the world following the death of Floyd. All players on each team will have their names removed from the back of their shirts and replaced with “Black Lives Matter.” They will also wear a Black Lives Matter logo and a badge thanking Britain’s National Health Service for the rest of season.

The latest example of the league’s clout came this weekend when 22-year-old star Marcus Rashford publicly demanded that Johnson’s government reverse its decision to halt school lunch vouchers for poor students over the summer holidays. The Manchester United and England player cited his own childhood experience of relying on free school lunches and food banks.

His campaign to protect hungry children drew wide support, prompting Johnson to make an abrupt policy U-turn Monday and continue the vouchers. Johnson then called Rashford to thank him.

After the announcement Rashford tweeted: “I don’t even know what to say. Just look at what we can do when we come together, THIS is England in 2020.”

During the lockdown and with the resumption of the season in doubt, the league had feared it could lose more than $1 billion for failing to meet broadcasting commitments.

Of the five biggest soccer nations in Europe, England is the fourth to get back on the field. Germany was first last month, while Spain and Italy resumed this month. France canceled the remainder of its season while the virus was still peaking — as did England’s neighbor, Scotland.

When teams were finally allowed to return to training, social distancing measures and testing for COVID-19 were put into place. Soccer authorities have now agreed to allow five substitutions in each match, rather than three, to cut down on injuries.

For now, only 110 people — including players, referees and coaches — will be allowed in the red zone around the field of play, and will be required to have a negative COVID-19 test in the previous five days as part of a medical passport that will see a barcode scanned before they can enter.

Although fans won’t be allowed in the stadiums, many games will be available to watch on free TV — partly to keep fans from gathering by the thousands outside stadiums.

The Premier League plans to finish the remaining 92 games of its season by July 26. There are also contingency plans for what to do if a second wave of infections that causes another shutdown but not about how to resolve an incomplete season.

The second division in England will also resume this weekend, while the third and fourth divisions will play only playoffs. The women’s league and the lower men’s leagues were all canceled.

Once all the national leagues are done, the country’s beloved FA Cup final will be held on Aug. 1. The Champions League is expected to finish its season in an abbreviated tournament-style finish in Lisbon in mid-August.

Pan Pylas in London contributed to this report.