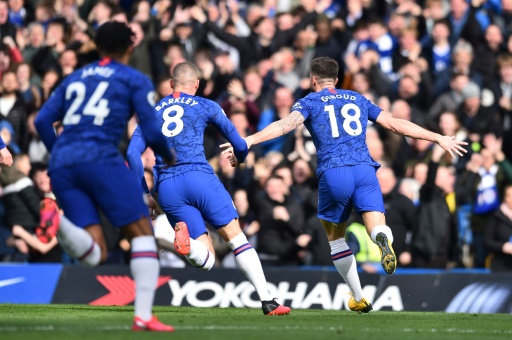 Sport has been forced behind closed doors for the foreseeable future but experts are divided over whether broadcasters will suffer or prosper in the new landscape.

Some believe television rights will either stagnate or decline in value, others think they will be driven up due to increased interest from tech companies such as Google and Amazon.

The sums in play are enormous. American broadcaster NBC’s current deal to cover the Olympics until 2032 is worth $7.75 billion.

The English Premier League’s most recent overseas TV rights package for 2019-22 rose a reported 35 percent in value to £4.2 billion ($5.25 billion) despite a fall in the value of the domestic rights.

European Broadcasting Union executive director of sport Stefan Kuerten is unconvinced that rights deals will continue to soar despite potentially millions being added to viewing figures.

The 61-year-old will on Friday step away after almost 20 years of negotiating global and European rights for events such as World Cups and Olympics on behalf of public service broadcasters.

“They (TV) will be in a strong position but will prices go up because of it? There I have doubts,” he told AFP by phone from Switzerland.

He believes the virus will have an impact on the industry.

“Broadcasters have learned now these kinds of pandemics exist and could ask for new exit and security clauses in contracts like a force majeure (unexpected event) or unforeseeable event. “The virus has placed a safety belt on sports broadcasters as to whether they increase the payment in case something else happens.”

Kuerten warns that viewers will tire of watching events without crowds, even if they can watch sport from the comfort of their armchairs.

“Without any fans in the stadium, TV is not sustainable for football or other sports,” he said. “When the crowd reacts, then emotions spill over into the screen.

“If one of these elements is missing then there are different sensations and viewers hesitate to have the same interest in the product as before. I have to say from my experience following matches (in the Bundesliga, taking place behind closed doors), something is missing.”

British advertising tycoon Martin Sorrell, who founded advertising giant WPP, is more bullish, though he admits the waters are choppy.

“There are not exactly positives to come out of this (coronavirus) but demand will see live sport at a premium and may see more distant viewers/fans tuning in and watching,” he said. “The rights will continue to increase driven by the incursion of digital media players, platforms and hardware companies.”

Sorrell, who sits on the International Olympic Committee’s Communications Commission, says it is clear that “public thirst for live sport, for watching it, has increased”.

The 75-year-old Englishman, who left WPP in 2018 and set up digital advertising and marketing services company S4 Capital, says the public have adapted to the online world.

“COVID-19 has had influence, with huge amounts of people unable to go to the shops due to lockdown shopping online, communicating online,” he said.

Terrence Burns, who since leaving his marketing executive role at the IOC has played a key role in five victorious Olympic bid campaigns, believes sponsors and advertisers who partner with broadcasters will be more selective.

“I think the ‘COVID pause’ will lead to what I call the ‘great value realignment’ in sport,” he said. “Obviously, brands (sponsors and advertisers) will come back to sport — it is the most emotive marketing strategy on the planet and most efficient.

“The question is what are they coming back to? Brands will be necessarily more demanding in terms of expenditure and value — they will be ‘pickier’ about what sports (competitions and events) they invest in.

“This means that smaller and or marginal sports may indeed suffer in the short term, but I also think this will force federations to find and create niches for the right brands.”