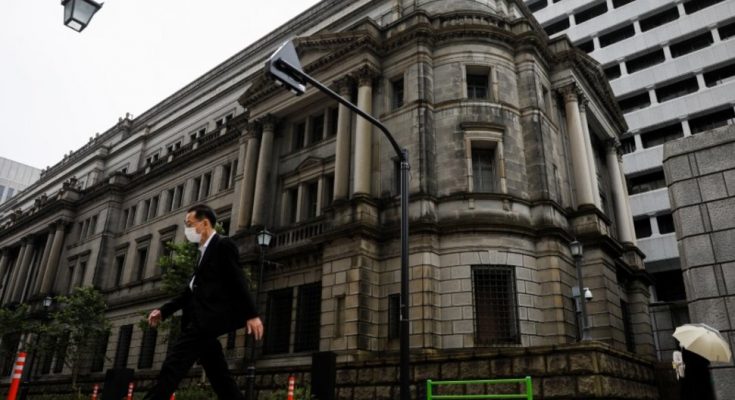 Tokyo – The balance of money circulating in Japan’s economy reached ¥543 trillion in May, hitting a record high for the second straight month, as the central bank pumped more cash to cushion the blow to businesses and consumers from the coronavirus pandemic.

Armed with a raft of loan programs aimed at prodding commercial banks to boost lending to cash-strapped firms, the Bank of Japan is expected to keep expanding its balance sheet to ease the fallout from the health crisis, analysts say.

“Japan’s economy will probably be in crisis-mode at least for the rest of this year. It would be very hard for the BOJ to slow the pace of money printing,” said Mari Iwashita, chief market economist at Daiwa Securities.

The balance of monetary base, or the amount of cash in circulation and deposits at the BOJ, stood at ¥543.4 trillion ($5 trillion) at the end of May, up 2.7 percent from the previous month, central bank data showed on Tuesday.

As part of monetary easing steps taken in April, the BOJ expanded a loan plan created in March and pledged to pay financial institutions a 0.1 percent interest for borrowing money and lending it out to companies. The move led to a surge in the number of regional banks participating in the program.

In May, the BOJ also unveiled its own version of the U.S. Federal Reserve’s “Main Street” lending programme to channel nearly $280 billion to small businesses hit by the coronavirus and stop the economy sliding deeper into recession.

While the BOJ’s aggressive monetary measures are considered essential to battle the crisis, it complicates its years-long efforts to shift its policy focus away from the pace of money printing towards interest rates.

After years of heavy asset buying failed to fire up inflation, the central bank shifted in 2016 to a policy targeting interest rates. Under yield curve control, it guides short-term rates at -0.1% and long-term bond yields around 0%.

Japan’s government lifted nationwide state of emergency last week. But the economy is on the verge of a deep recession as the pandemic disrupted supply chains, hit global and domestic demand and forced many businesses to close.