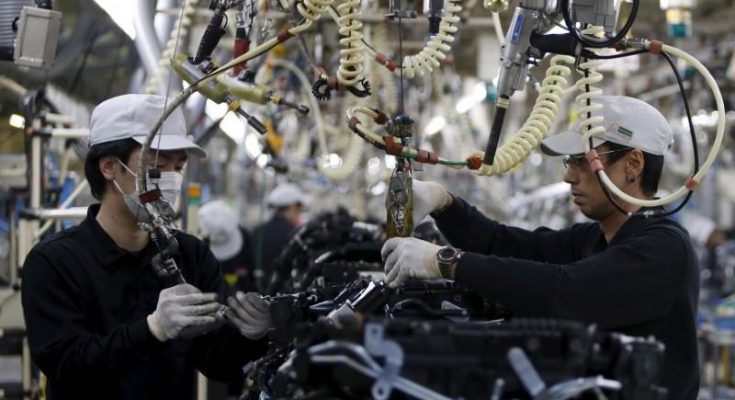 TOKYO : Japan’s factory activity shrank at the fastest pace since March 2009 in May, a private sector survey showed on Monday, as manufacturers widely struggled with the demand blow from the coronavirus pandemic.

The final au Jibun Bank Japan Manufacturing Purchasing Managers’ Index (PMI) fell to a seasonally adjusted 38.4 from 41.9 in March, its lowest since March 2009, and matching a preliminary reading last month.

“May survey data revealed that production volumes are falling at an even faster rate than in April,” said Joe Hayes, economist at IHS Markit, which compiled the survey.

“Anecdotal evidence from the survey showed that was the result of collapsing demand, which fell at the sharpest rate since the global financial crisis,” he added.

The pandemic has been particularly disruptive for trade-reliant nations such as Japan, which already slipped into recession in the first quarter.

The government last week lifted the state of emergency and approved a second $1.1 trillion stimulus package, bringing the total pledged to save the economy from the pandemic to about 40% of gross domestic product.

A silver lining in the gloomy data were employment conditions as the rate of job shedding eased from April, when the drop in staffing levels was the sharpest in more than a decade.

“While easing lockdown measures will be positive for the economic environment, it is clear that dislocations will remain,” Hayes said.

“Until we see a sustained improvement in demand, manufacturing conditions are likely to remain fragile.”