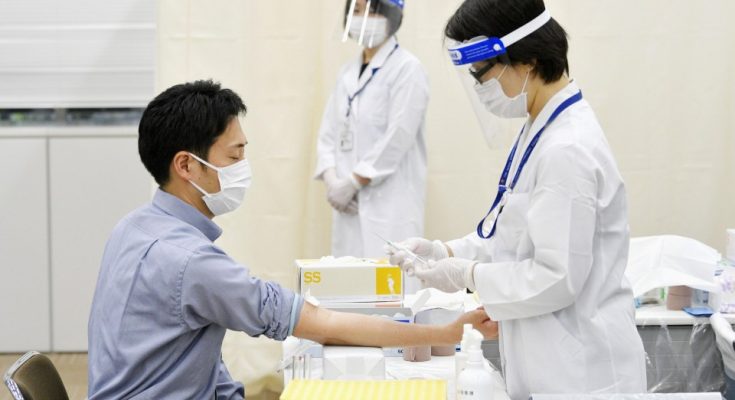 TOKYO : The health ministry began testing around 10,000 people for coronavirus antibodies Monday in a bid to better grasp the scale of infection, as the country braces for a possible resurgence following the lifting of a state of emergency last week.

The tests, which look for specific proteins made by the immune system in response to infection, began in Tokyo and Miyagi Prefecture, and Osaka will follow suit on Wednesday.

The government hopes to find out the rough number of people who have been infected with the virus including asymptomatic people from the blood tests of 3,000 randomly-chosen residents aged 20 or older in each prefecture.

The results are expected to help authorities gain an outlook for infection numbers if a resurgence takes place and estimate how many people will need a vaccination once one becomes available.

At a test site in Tokyo’s Itabashi Ward, a nurse from the Japan Anti-Tuberculosis Association wearing a face shield, mask and gloves, explained to the media prior to the start of the tests that it takes about one to two minutes to take a blood sample.

“Knowing the actual conditions of infection should help the government take measures in the future,” an association official said.

In Natori, Miyagi Prefecture, a 69-year-old man who took the test said he has not felt ill since the virus outbreak began.

“I hope my data will help society,” he said.

The tests for COVID-19, the contagious respiratory disease first identified late last year in Wuhan, China, will use three methods and take less time than the currently dominant polymerase chain reaction, or PCR, test that uses a swab from a patient’s nose and requires a minimum of several hours to produce a result.

Japan has had more than 17,500 infection cases, with over 900 deaths. The government fully lifted the state of emergency on Monday last week.

Tokyo and Fukuoka Prefecture have seen an increase in the number of infection cases in recent days but the government said it has no immediate plan to place the areas under an emergency declaration again.