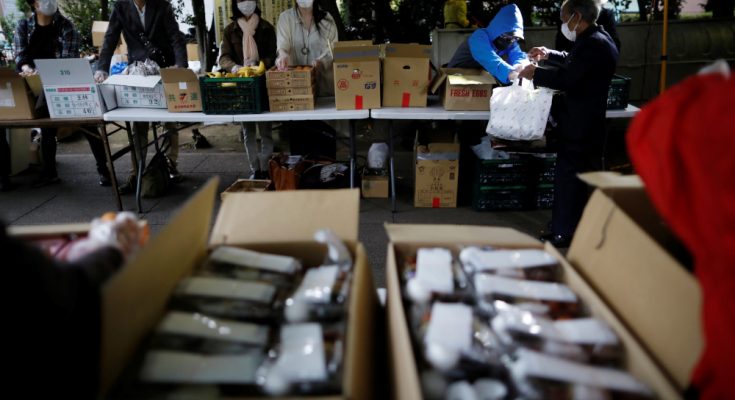 TOKYO : Japan’s labor market in April appeared to be weathering a severe slowdown in economic activity due to the coronavirus pandemic, but a closer look at official data released on Friday revealed a less rosy picture.

Japan’s jobless rate rose to 2.6% in April from 2.5% in the previous month, a far cry from the 14.7% in the United States in April, a post-World War Two record, and the 7.7% in the euro zone in March. But economists say the small rise in the official unemployment rate masks the full extent of the pain.

Analysts fear rises in the jobless rate could put the brakes on personal consumption in Japan and delay a recovery of the world’s third-largest economy, which already slipped into recession in the first quarter.

Among those categorized as employed, those on furlough more than tripled to 4.2 million in April from the previous month. Although many furloughed workers will eventually go back to their jobs, their inclusion in April’s unemployment figures would indicate a rate of 11.4%, Dai-ichi Life Research Institute said.

Friday’s data also showed the number of workers fell by a seasonally adjusted 1.07 million in April from the previous month, the largest drop since a 1.13 million decline in January 1963, a Ministry of Internal Affairs and Communications official said.

That compared with an increase of just 60,000 in the number of unemployed people, which only includes those who were actively seeking employment during the survey period, among other criteria.

Japanese firms, saddled with large workforces and excess capacity, laid off workers during the 2008-2009 global financial crisis and the collapse of the global high-tech bubble in the early 2000s.

Now many are facing pressure to reduce labor costs by cutting jobs as they struggle with a decline in economic activity, especially in the service sector and at small and mid-sized firms.

The workers in Japan facing the brunt of those cuts are often workers without job security – part-timers, contract workers and temporary workers, who account for 36.2% of the total number of workers. The number of non-regular workers posted the biggest year-on-year drop on record in April, the data showed.

“The April jobless rate reached 2.6%,” Finance Minister Taro Aso told reporters after a cabinet meeting on Friday. “There’s no doubt the impact of the coronavirus is playing out in economic activity. I think the numbers will deteriorate further in May.”