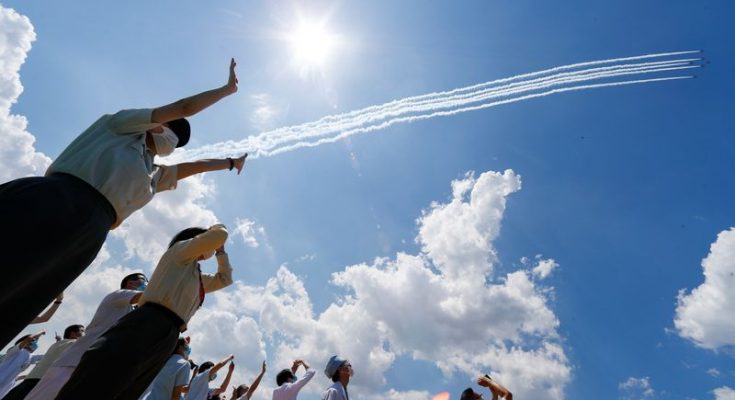 TOKYO : The Japan Air Self Defense Force’s aerobatic demonstration squadron, Blue Impulse, flew over central Tokyo on Friday in a salute to medical workers on the frontline against the coronavirus pandemic.

As a team of six T-4 training jets streaked across a clear blue sky shortly after noon, doctors and nurses on hospital rooftops waved and held up mobile phones to take photos of the passing planes.

“We have been working under strain for the past four months… I heard them (medical workers) saying the demonstration lifted their spirits,” said Shuichi Mikami, a spokesman for Tokyo’s Ebara Hospital.

Japan has managed to avoid an explosive surge in coronavirus infections, with 16,759 confirmed cases of COVID-19, including 882 deaths, as of Friday morning, according to public broadcaster NHK.

“A lot of people, including medical workers, are working hard to prevent the spread of the coronavirus. We would like to pay our respect and express our appreciation,” Defense Minister Taro Kono said ahead of the flight.

Comments on social media, however, suggested some people felt the effort should have been directed instead toward protecting the frontline workers.

“Money for flying these planes would have been better used to buy masks and other protective equipment,” wrote one Twitter user.