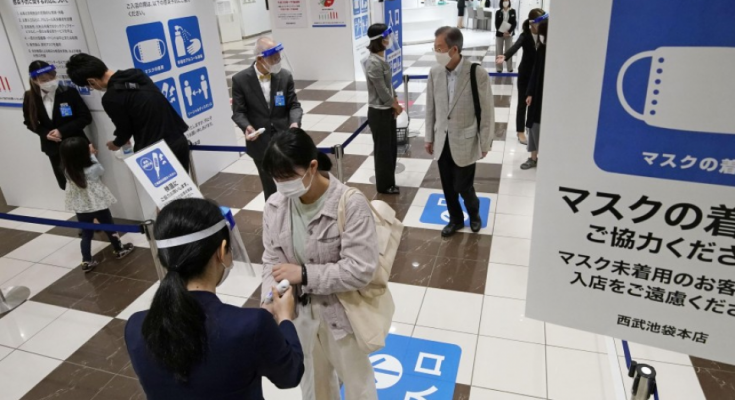 TOKYO : Some major department stores in the Tokyo metropolitan area resumed more of their operations Saturday following a six-week suspension over the novel coronavirus outbreak.

After the Seibu department store in Tokyo’s Ikebukuro district opened its doors at 10 a.m., more than 50 people who had been waiting outside entered after having their temperature checked and disinfecting their hands.

The department store had continued to operate its food section even after Prime Minister Shinzo Abe declared a state of emergency over the pneumonia-causing virus on April 7.

The flagship store of Sogo and Seibu Co. has now reopened floors for clothing and other daily necessities, but not for jewelry and art products.

“We have heard from many customers that they want to buy women’s clothes and household goods,” said manager Toshiki Kubota. “We can now finally welcome them after taking sufficient anti-infection measures.”

Matsuya Co’s Matsuya Ginza department store, which has been closed completely, plans to resume sales of food on Monday and return to full operations on June 1.

The Tokyo government has confirmed 5,138 cases so far. It received reports of eight new deaths of coronavirus patients Saturday, raising the toll to 271.

Prime Minister Shinzo Abe is expected to lift the state of emergency in Tokyo, three neighboring prefectures and Hokkaido on Monday based on advice from experts.

Among the three prefectures neighboring the capital, Kanagawa confirmed five new cases and two deaths, while Saitama reported one new case. No new case was reported in Chiba.

Economic revitalization minister Yasutoshi Nishimura in charge of the pandemic response said in a news conference, “A favorable trend is continuing” in the five prefectures still under the state of emergency, before the government convenes a meeting with experts Monday to decide whether to end their social and economic restrictions.

He also announced plans to hold a survey among approximately 10,000 people across the country on social and work practice changes in order to devise policies to encourage new lifestyles without lowering the guard against the virus.