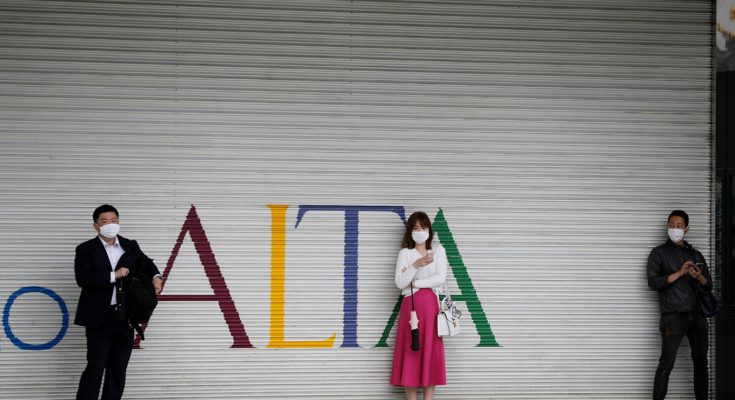 TOKYO : Japan is expected to end its coronavirus-related state of emergency Monday by easing curbs on economic activity in Tokyo and four other prefectures ahead of schedule, with the spread of infections under control.

Prime Minister Shinzo Abe is expected to announce the decision at a 6 p.m. Monday news conference.

As it has done in the rest of the country, the government intends to end the declaration over the Tokyo metropolitan area — including Chiba, Kanagawa and Saitama — as well as Hokkaido in northern Japan, economic revitalization minister Yasutoshi Nishimura said.

The emergency declaration, initially declared on April 7 for Tokyo, Osaka and other urban areas which then had relatively high numbers of cases and expanded nationwide nine days later, has already been lifted in 42 of the country’s 47 prefectures. The measure was expected to run until Sunday.

An advisory panel needs to assess whether the government plan is appropriate before Abe can formally make a decision.

“After a comprehensive assessment, (the government believes) the state of emergency is no longer necessary in all prefectures. We’d like to consult with you on declaring an end to the measure,” Nishimura told the panel at a meeting on Monday.

After the emergency is lifted, the government will establish a transitional period and assess the infection situation every three weeks meaning requests for people to stay at home and avoid large gatherings may be eased only gradually.

Nishimura said the government will continue to ask people to refrain from crossing prefectural borders until the end of the month.

The panel of infectious disease and public health experts is considering the number of newly reported cases over the past week, the availability of medical care, and the capacity to provide virus tests and monitor the spread of the virus.

One benchmark is whether new infections have fallen below 0.5 per 100,000 people in the past week and all but two prefectures — Kanagawa and Hokkaido — have cleared that threshold.

Japanese government officials say the 0.5 benchmark is not the only determinant, adding whether existing cases’ transmission routes are traceable is also important, among other factors.

Abe is calling for Japanese people to alter their lifestyles by wearing face masks, maintaining social distancing and working from home to allow the lifting of the state of emergency to breathe life into the recession-hit economy. The Tokyo area and Hokkaido account for about a third of the nation’s gross domestic product.

Japan is lifting the coronavirus emergency declaration roughly seven weeks after it was enforced. Abe expanded the measure to all 47 prefectures in mid-April ahead of the Golden Week holidays from late April to early May to encourage people to cancel their travel plans.

Earlier in the month, Abe extended the state of emergency until May 31. But on May 14 he exempted 39 prefectures where the spread of the virus had been brought under control, followed by Osaka, Kyoto and Hyogo in western Japan last Thursday.

The state of emergency gave prefectural governors legal authority to request people forgo nonessential outings and businesses to suspend their operations, even though Japan cannot legally enforce a hard lockdown similar to those implemented in Europe and the United States.

Governors of areas that have largely dealt with the virus emergency have relaxed such requests on the public and businesses.

The Tokyo metropolitan area has been Japan’s hardest-hit region, as the nation’s capital with its population of about 14 million people reported the largest number of cases, more than 5,100.

The governors have asked the central government to treat the four prefectures — Tokyo, Chiba, Kanagawa and Saitama — collectively in any decision to lift the emergency declaration due to their geographic proximity and interlinked economies.

Tokyo Gov Yuriko Koike has unveiled a three-stage plan to relax restrictions imposed over the coronavirus, allowing restaurants and eateries to stay open until 10 p.m., longer than 8 p.m. at present, and schools to gradually resume classes.

Japan has so far avoided an explosive surge of virus infections with over 17,200 cases and 853 deaths reported across the nation, but infectious disease experts have been calling on the public to remain alert for a second wave as restrictions are lifted.

Japan’s tally includes about 700 infections from the Diamond Princess cruise ship that was quarantined off Yokohama near Tokyo in February.