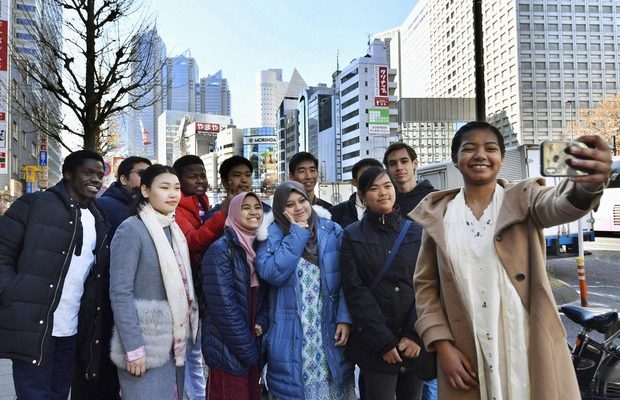 TOKYO : The Japanese government has set an additional criteria for foreign students hoping to receiving cash handouts of up to 200,000 yen for students in the country struggling financially amid the novel coronavirus pandemic, making only those in the top 30 percent of grades eligible.

The additional condition, which will create a gap in the financial support for students facing hardship in paying for tuition or living costs, has sparked criticism as many foreign students experience the same challenges as their Japanese counterparts.

Members of a student advocacy group that has been calling on the government to reduce school expenses called the decision “complete discrimination.” On Twitter, a Japanese hashtag meaning “The education ministry should give all foreign exchange students the cash handout” has also been gaining traction.

In explaining its decision, the education ministry has said, “With many foreign students eventually returning to their home countries, we have set a condition to limit the handout to promising talent most likely to contribute to Japan in the future.”

As the government will rely on institutions to determine which of their students should receive the assistance, those not meeting the criteria may still be eligible for the handouts, it said.

Education minister Koichi Hagiuda indicated that students from overseas would be eligible for the program during a press conference Tuesday, when he announced that cash handouts would be provided to around 430,000 university and other students in Japan.

But he made no mention of the additional criteria foreign students needed to fulfill, which only came to light during communication with universities and other institutions.

According to the ministry, requirements for program eligibility include a reduction of over 50 percent in the monthly income from part-time jobs used to support tuition fees and, in general, a yearly allowance of less than 1.5 million yen from family. The student must also be living outside of home.

In addition, foreign students must be achieving high marks and have attained a grade point average of at least 2.30 in the past academic year. This accounts for the top 25 to 30 percent of students, the ministry said.

Foreign students must also have a monthly attendance rate of over 80 percent, receive less than an average 90,000 yen allowance per month excluding registration and tuition fees, and not be a dependent of someone in Japan earning more than 5 million yen a year.

On top of the conditions, those “deemed by their institutions as unable to continue their studies due to financial difficulties” will be eligible for the handouts, the ministry said.

In order to quickly provide assistance, the government has left the screening of eligible students to each institution. Universities and other schools will select eligible students from a pool comprised of Japan Student Services Organization scholarship recipients and other records.

The education ministry has not calculated what percentage of the roughly 430,000 students eligible for the program are foreigners.

Koki Saito, a university student and student advocacy group member, said foreign students are in just as dire need of help but unlike their Japanese counterparts have to face a grade eligibility requirement.

“The government has been taking steps to attract foreign students but when things go wrong, are you going to drop them? This may become an international issue, and I want this requirement scrapped,” Saito said.