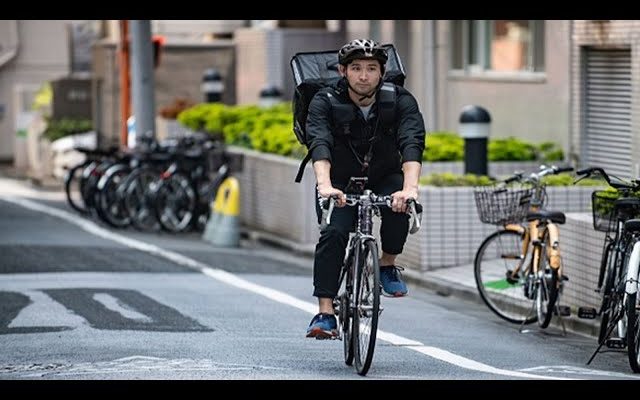 With the Olympics postponed due to the coronavirus, top Japanese fencer Ryo Miyake has swapped his metal mask and foil for a bike and backpack as a Tokyo UberEats deliveryman.

The 29-year-old, who won silver in the team foil at the 2012 London Olympics and was itching to compete in a home Games, says the job keeps him in shape physically and mentally — and brings in much-needed cash.

“I started this for two reasons — to save money for traveling (to future competitions) and to keep myself in physical shape,” he told AFP. “I see how much I am earning on the phone, but the number is not just money for me. It’s a score to keep me going.”

Japanese media have depicted Miyake as a poor amateur struggling to make ends meet but he himself asked for his three corporate sponsorships to be put on hold — even if that means living off savings.

Like most of the world’s top athletes, he is in limbo as the virus forces competitions to be cancelled and plays havoc with training schedules.

“I don’t know when I can resume training or when the next tournament will take place. I don’t even know if I can keep up my mental condition or motivation for another year,” he said. “No one knows how the qualification process will go. Pretending everything is OK for the competition is simply irresponsible.”

In the meantime, he is happy criss-crossing the vast Japanese capital with bike and smartphone, joining a growing legion of Uber delivery staff in demand during the pandemic.

“When I get orders in the hilly Akasaka, Roppongi (downtown) district, it becomes good training,” he smiles.

The unprecedented postponement of the Olympics hit Miyake hard, as he was enjoying a purple patch in his career.

After missing out on the Rio 2016 Olympics, Miyake came 13th in last year’s World Fencing Championships — the highest-ranked Japanese fencer at the competition.