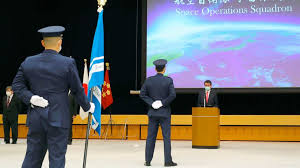 The Space Operations Squadron, part of Japan’s Air Self-Defence Force, starts with 20 members and is expected to grow to about 100 members once the unit is fully operational in 2023.

The role of the unit is mainly to monitor and protect Japanese satellites from enemy attacks or space debris. It will also conduct satellite-based navigation and communications for other troops in the field.

The launch of the new unit comes amid growing Japanese concern that China and Russia are seeking ways to interfere, disable or destroy satellites.

“It is important that we gain superiority in the space domain as well,” Kono said Monday at a launch ceremony. “We must adapt to the new security environment as soon as possible.”

Prime Minister Shinzo Abe has pushed for Japan’s Self-Defence Force to expand its international role and capability by bolstering co-operation and weapons compatibility with the U.S., as it increasingly works alongside American troops and as it grows concerned about the increasing capabilities of China and North Korea.