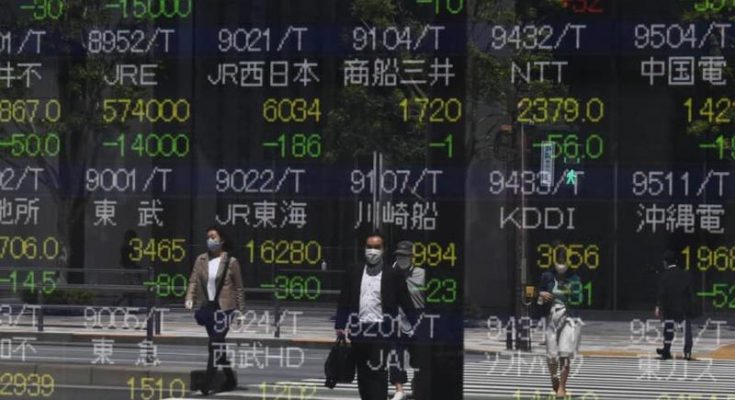 Japan is casting an even wider protectionist net to shield its big companies.

It has less to do with defending against unsolicited overtures into strategic assets than with squeezing out troublesome foreign investors. The moves will strangle what’s left of the drive to reform corporate governance and undermine long-suffering households as an economic crisis takes hold.

On May 8, Tokyo laid out details of new rules that restrict overseas investment through amendments to its Foreign Exchange and Foreign Trade Act, in a bid to preserve industries in the interest of national security. A so-called core list includes giants like Toyota Motor Corp. and SoftBank Group Corp. that amounts to 40 percent of the Topix index by market capitalization. The government also spelled out much-awaited exemptions that establish whether outside investors are subject to the rules. The effect is to add onerous hurdles to what had been an open market, nearly one-third owned by foreigners who account for most of the daily turnover, according to Goldman Sachs Group Inc.

The changes underscore Japan’s sharp retreat from the encouraging reforms undertaken since 2015. They had been succeeding. Shareholder proposals for auditor or director changes were up, as were returns. Hedge funds such as Dan Loeb’s Third Point LLC and Paul Singer’s Elliott Management Corp. have all had their eyes on the likes of Sony Corp. and SoftBank. On Tuesday, London-based activist Asset Value Investors Ltd. took on elevator- and escalator-maker Fujitec Co. to improve governance and returns. A fairly liquid market had meant foreigners could choose where they put their money without needing to consider the extra layer of regulations for participation and if companies were subject to them. Now, under the new rules taking effect June 7, any overseas investor who wants to build a stake of more than 1 percent needs to notify regulators, a severe tightening from the previous 10 percent. Who wants to seek approval well before investing and be hamstrung on timing?

Most foreign money managers will have blanket exemptions, but they must comply with certain conditions. The caveats effectively shut out activists: Investors can’t become board members and they can’t propose spin-offs at general shareholder meetings.

Other large managers can be exempted if they don’t join board committees or issue written proposals with deadlines. Otherwise, they can go big. Tokyo is signaling that it wants passive investors to hold up its market, very little accountability and to give Japanese companies a heads-up if cantankerous hedge fund action is coming.

Ostensibly, the rules are meant to protect national security. They’re in line with the global trend to strengthen measures for screening foreign direct investments, according to the Finance Ministry. But they also include operators of hot springs and makers of fountain pens. In reality, the list is a way to disregard governance oversight. The wide reach of the law is telling: Of the 10 largest companies on the Tokyo Stock Exchange, seven fall into the core category. Health care and pharmaceutical companies, which currently have a small weight, are expected to be added as the importance of the viral outbreak increases. That’s also a sector hedge funds are active in.

COVID-19 is already pushing Japan’s big, cash-hoarding companies into self-preservation mode and is benching activists. Earnings per share are expected to decline by as much as 18 percent over the next fiscal year, with Goldman Sachs foreseeing extraordinary losses to total ¥8 trillion ($74 billion) over fiscal 2019 and 2020. The new rules will make this worse, dashing the prospects of change at progressive companies that might have been willing to take certain types of activist hedge funds onto their boards.