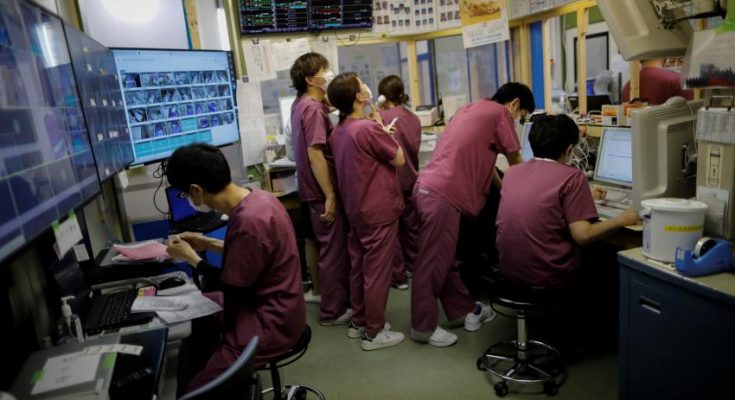 The survey by the Zenkoku Ishi Union, posted on its website on Friday, found nearly 70% of doctors saying the government is failing to handle the situation properly.

Japanese hospital doctors on the front line of the COVID-19 pandemic face tough working conditions, with many reusing masks and few getting hazard pay, a survey by a labour union showed.

The survey of about 170 doctors, conducted online from late April through May 6, found three-quarters said they were ordered to work on the coronavirus front line, while four-fifths said they receive no hazard allowance for the work.

In the global scramble for protective gear and medical equipment, some Japanese doctors and other experts say there has been a failure by the national and some local governments to provide adequate financial assistance and protective gear to hospitals and medical staff.

The survey by the Zenkoku Ishi Union, posted on its website on Friday, found nearly 70% of doctors saying the government is failing to handle the situation properly.

An official at Japan’s health ministry said no one was available on Sunday to comment on the survey’s findings.

The survey found 31% of doctors reusing N95 respirator masks, which are essential for protecting healthcare workers from contagion and meant to be discarded immediately, with some using the masks indefinitely.

One doctor reported using “the same mask until the ear bands break.”

Prime Minister Shinzo Abe lifted his state of emergency for 39 of Japan’s 47 prefectures on Thursday, easing curbs on 54% of the population. The greater Tokyo area, accounting for one-third of the nation’s economy, and other major cities remain under restrictions.

Japan has reported some 16,300 cases of the coronavirus, not counting infections on a cruise ship that was quarantined in Yokohama port early this year, and 748 deaths from COVID-19, the disease caused by the virus, according to public broadcaster NHK.