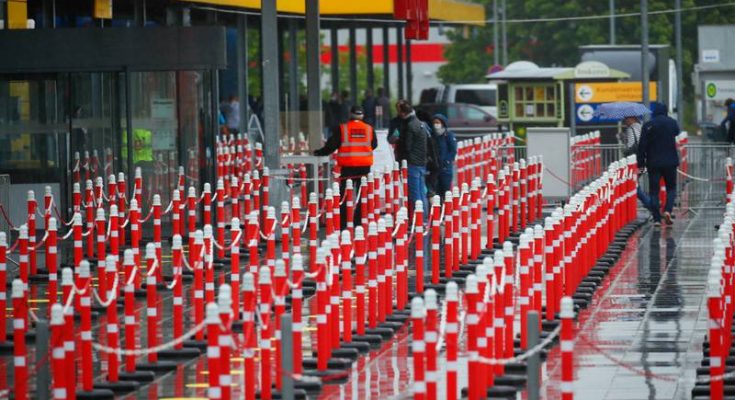 Tokyo Gov. Yuriko Koike on Friday revealed a framework for the city’s plan to gradually reopen society while taking steps to prevent a second wave of the novel coronavirus until a vaccine is developed or the contagion subsides.

The governor presented several criteria for lifting voluntary isolation measures and business closure requests, as well as procedures with which the capital intends to continue monitoring new cases even after the central government lifts the state of emergency for Tokyo.

“It’s our duty to act together to overcome this state of emergency,” Koike said during a news conference Friday. “Social distancing measures must become commonplace.”

The capital will announce the plan in its entirety, as well as an additional supplementary budget, on Tuesday.

In deciding whether to ease restrictive measures, lift them completely or even reinstate them, the Tokyo Metropolitan Government will closely monitor daily cases, untraceable cases and the infection rate from week to week. Measures could be eased if new daily cases don’t exceed 20 individuals, untraceable cases account for less than half of new cases, and the infection rate among new cases is less than that of the previous week.

The capital will also assess the condition and testing capacity of its health care system as well as the average infection rate over the span of multiple days.

Including Friday, Tokyo has reported fewer than 50 new cases for 10 consecutive days

Moving forward, Koike said business closure requests may be reinstated if new cases exceed 50, more than half of new cases are untraceable or the city reports more than double the new cases it did during the week prior.

Koike said Tokyo will reopen in three stages. Museums, libraries and other cultural facilities will reopen in the first stage; performance venues, food establishments and other locations “with no history of cluster infections” will be able to resume normal business hours in the second stage; and, in the third and final stage, all facilities except for those considered “high risk” will be able to reopen.

Including the capital, eight prefectures were exempted from Prime Minister Shinzo Abe’s decision announced Thursday to lift the state of emergency in most parts of the country.

As it stands, the declaration — which was first made on April 7 and extended to the rest of the country nine days later — will remain in place for Tokyo, Hokkaido, Chiba, Saitama, Kanagawa, Osaka, Hyogo and Kyoto prefectures.

In Tokyo, which is expected to remain in a state of emergency until May 31, residents are being asked to continue isolating themselves, working from home and avoiding nonessential outings.

The central government will reexamine the situation in those eight prefectures next Thursday. Until then, residents are asked to continue isolating themselves by working from home and staying indoors.

In 39 of the country’s 47 prefectures, municipal leaders have already begun lifting voluntary requests for residents to isolate themselves and for businesses to temporarily close.

Lifting the state of emergency is a double-edged sword. Reopening society abruptly or prematurely could invite a second wave of infections, but keeping it in place would further stretch an already belabored economy.

The pandemic has brought life to a standstill in Japan and pushed its economy to the brink of recession. The manner in which different prefectures lift the state of emergency — or prepare to do so — is a crucial test, not only for Abe and Koike, but for local leaders throughout the country.

Osaka Gov. Hirofumi Yoshimura drew ire earlier this month when he criticized the central government for taking so long to instruct prefectural leaders on how and when to lift the state of emergency. Yoshimura then announced guidelines for reopening society, making Osaka the first prefecture in the country to do so.

Osaka Prefecture appears to have satisfied the three criteria Yoshimura put forth on April 7, namely that — in the seven days following the announcement — untraceable cases did not exceed 10, the daily positive infection rate didn’t surpass 7 percent and less than 60 percent of hospital beds are being used by critically ill coronavirus patients.

Yoshimura was expected to announce the next stage of his “Osaka Model” on Friday.