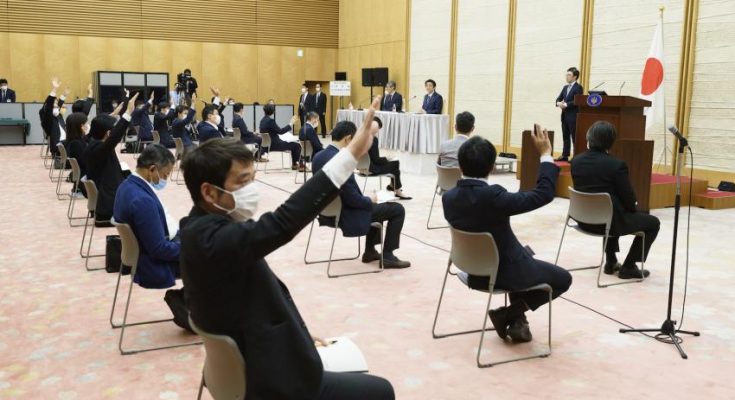 TOKYO: Japan’s most powerful business lobby on Thursday called on member companies to introduce a four-day workweek and seek flexible ways to hold upcoming shareholders’ meetings as part of guidelines on how to prevent the spread of the novel coronavirus.

The Japan Business Federation, known as Keidanren, and about 80 other industrial groups compiled guidelines for reducing the risk of virus infection in the workplace, as the government the same day lifted a state of emergency for 39 of the country’s 47 prefectures, a move that will restart economic activity. Major business regions such as Tokyo and Osaka, however, will remain under the state of emergency.

The federation recommended the introduction of a four-day workweek and the promotion of teleworking as well as flexible business hours and working shifts as ways to ease congestion on public transportation.

Companies were also advised to suspend nonessential business trips and conduct meetings and interviews or seminars with job seekers online.

“The partial lifting of the state of emergency is a big first step toward normalization of public lives and the resumption of economic activities,” Hiroaki Nakanishi, chairman of the Japan Business Federation, said in a statement. “But there is still a need for the thorough implementation of infection prevention measures.”

Hitachi Ltd said its employees have been asked to work from home until now but they will start working at the office a day or two a week. Toshiba Corp will seek to introduce a four-day workweek for plant workers.

Shiseido Co said it will resume over-the-counter sales at department stores and other commercial facilities.

Major department store operators and restaurant chains have decided to resume operations or extend opening hours at some outlets after closure requests have been lifted.

Economic revitalization minister Yasutoshi Nishimura said a total of 81 industry bodies released guidelines on how to reduce the risk of infection.

Prime Minister Shinzo Abe declared in early April a one-month state of emergency until May 6 for seven urban areas hit hard by the virus and expanded it to the whole country on April 16 and extended it to May 31. On Thursday, he lifted the state of emergency in 39 prefectures where the spread of the novel coronavirus had been kept in check.

Among other business groups, the Japan Foodservice Association, which represents restaurant operators, suggested seating layouts in which customers would not face each other and the installation of acrylic sheets between tables.

“It’s important that each restaurant come up with its own steps (to prevent infections) as the situation differs from one to another,” Shinichiro Takaoka, head of the association said at a press conference.

An Osaka-based cooperative union of pachinko parlors proposed offering numbered tickets to prevent customers from lining up before the opening, as well reducing the volume of in-store music so people do not need to speak loudly to each other at close proximity.

The Japan Association of Theater Owners, meanwhile, said movie theaters should sell every other seat to create space side to side and back to front.

Groups of supermarkets and convenience stores suggested setting aside dedicated shopping hours for pregnant women and the elderly.