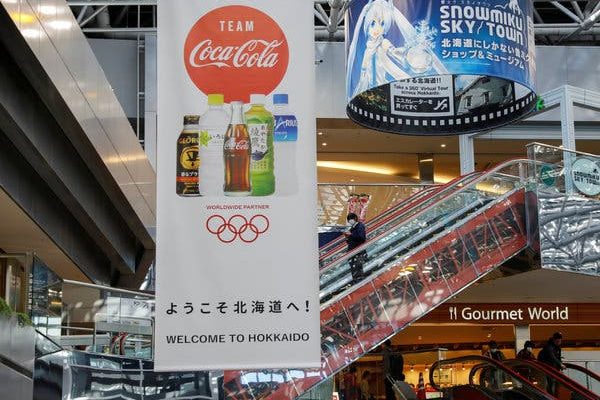 The COVID-19 epidemic is prompting companies in Tokyo to take down advertisements from stations and train cars, where ads were plentiful prior to the outbreak.

“It is a huge blow to the whole advertising industry,” said a source in the industry.

The change in scenery was evident in the busy Shibuya district of Tokyo.

The Hachiko Board billboard, located over an exit of East Japan Railway Co.’s Shibuya Station, was blank Thursday, looming over a quiet district that had bustled with young people before the spread of the novel coronavirus.

Advertising posters on the walls of the station concourse have also been taken down, as have signboards near the Shibuya 109 department store.

The Hachiko Board, 4 meters tall and 20 meters wide, is a popular advertisement spot often captured by television cameras during live filming in front of the station.

According to JR East Marketing & Communications Inc., an advertisement arm of JR East, it costs ¥8 million per week before tax to place an ad on the board.

While many prospective advertisers vied for the spot prior to the outbreak, it has not carried any ads for four straight weeks since April 20.

“I don’t recall it having been empty for so long,” an official said.

Trains that had many ads hanging from the ceiling prior to the outbreak now only have ads from Keio itself and posters cautioning against infection.

According to the Japan Association for Rail Advertising, the decrease in in-car ads is spreading from train lines with smaller numbers of passengers.

The decline in ad effectiveness is viewed as the primary factor for the shift. But companies are also pulling ads because their facilities are being shut and they want to avoid drawing crowds.

“Ad listing fees are beginning to drop,” an association official said. “Even if the state of emergency is lifted, we can’t see whether ads will return soon.”