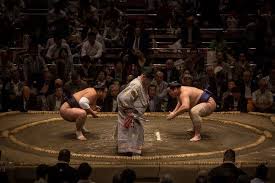 Sumo’s governing body announced on Monday cancellation of the upcoming Summer Grand Sumo Tournament due to the coronavirus pandemic, while also revealing plans to relocate the following top-level meet from Nagoya to Tokyo.

The Summer Grand Tournament had been scheduled to take place between May 24 and June 7 at Tokyo’s Ryogoku Kokugikan after the Japan Sumo Association delayed the opening of the 15-day meet by two weeks in response to the outbreak.

While the association had considered going ahead with the meet behind closed doors, it decided to cancel the event shortly after Prime Minister Shinzo Abe announced an extension of the nationwide state of emergency over the coronavirus until the end of this month.

With the cancellation having looked increasingly likely in recent days, wrestlers including newly promoted ozeki Asanoyama indicated they had anticipated the decision.

“I will continue preparing carefully, one day at a time, while looking ahead to the July tournament,” said the rising star, who had been readying to make his debut at sumo’s second-highest rank.

One of the sport’s most popular figures, diminutive maegashira Enho, sympathized with fans left disappointed by the cancellation of the tournament.

“People were looking forward to it, and we were preparing with the idea it would go ahead. Unfortunately, there just wasn’t a way. Now we have to prepare as best we can for July,” Enho said.

Yokozuna Kakuryu, meanwhile, said he would focus on “making sure everyone is in good shape for the July meet.”

The cancellation is the third in sumo history, and the first since the March 2011 grand tournament was shelved due to a match-fixing scandal.

The most recent top-level meet — the Spring Grand Sumo Tournament, held at Edion Arena Osaka in March — was the first to be held without spectators after the JSA took the step in response to the coronavirus crisis.

With the future outlook remaining uncertain, the association said Monday it planned to move the Nagoya Grand Tournament, scheduled to open July 19, to Tokyo, with the meet likely to also take place behind closed doors. The association has yet to make a final decision on the matter.

The move is partly aimed at discouraging spectators from Tokyo and other areas converging on Nagoya at a time when the risk of spreading the virus might still be high.

With Nagoya hosting just one top-level tournament each year, the decision to relocate the event was met with disappointment in the central Japanese city.

Naoki Saka, a representative of the Matsubaya Ryokan traditional Japanese inn in Suzuka, Mie Prefecture, said local residents enjoyed coming to watch the wrestlers at the lodgings, where the Oitekaze sumo stable takes up residence each year for the tournament.

“Every year, everyone looks forward to seeing the wrestlers practice here in the morning. It’s really unfortunate,” Saka said.

As of Sunday, seven people within the JSA had tested positive for the pneumonia-causing coronavirus, including stablemaster Takadagawa, second-tier wrestler Hakuyozan and five lower-ranked wrestlers.