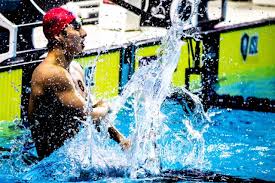 KYODO – It’s taken time but Katsuhiro Matsumoto, the silver medalist in the men’s 200-meter freestyle at last year’s world championships, has accepted the fact that despite the huge progress he’s made over the winter, 2020 isn’t going to be his year after all.

Matsumoto, who holds the national record in the event with a time of 1 minute, 45.22 seconds, felt he was within striking distance of winning an Olympic gold medal this summer until learning on March 23 that the Tokyo Olympics would be postponed. Two days later, the national championships — Japan’s Olympic qualifying tournament — was canceled.

“After all I had done this just couldn’t happen,” the disappointed 23-year-old swimmer said.

Matsumoto made his mark at last year’s worlds. His calling card is a powerful kick that seemingly allows him to glide smoothly without any drag from his lower body sagging. In the 200 freestyle final, he overtook two swimmers in a fearsome final 50 meters to rewrite the Japan record. It was Japan’s first medal in the event at worlds or the Olympics.

With the Olympics scheduled to be held in Japan, Matsumoto was clear about the challenge he needed to overcome to reach his goal of standing on the top step of the podium. In order to save energy for his powerful finish, Matsumoto had been cruising over the penultimate 50 meters, and slowed down considerably in the process.

Being overly conscious of his pace forced him to rapidly accelerate at the end, resulting in inefficient effort. The question was whether or not he could find a way to maintain some of his speed over that penultimate 50-meter stretch. After a period of trial and error, he found a potential solution at January’s Kosuke Kitajima Cup.

After the first-half turn, Matsumoto said he “maintained an image of gradual acceleration” and produced a good time. Despite lingering fatigue from his year-end training in Thailand, Matsumoto shaved 0.01 second off his time from his 150-meter split at the world championships final.

High-altitude training in Mexico from February to March convinced Matsumoto he was on the right track. Through difficult practices, he was able to swim three consecutive 50-meter laps, each in 40 seconds or less. Even without straining on the third lap, he was able to get it so there was not more than a 0.20-second difference between any of the three, and said he “found the key” to the problem.

On March 29, he swam in a timing meet for swimmers lacking competition in which to push themselves. He was 0.10 faster over the first 100 meters than in his Japan record race and 0.25 faster after 150 meters. But lacking the challenge of a real race, Matsumoto fell off the pace and finished in 1:45.44.

“It showed I have the ability to swim 1:44,” said Matsumoto, who had been drawing up plans to improve his times further, including a training trip to the United States this summer.

“Someone is definitely going to swim 1:43 at the Olympics,” coach Yoji Suzuki said.

Matsumoto said, “I was going to push toward the 43-second level at an altitude training camp in June.”

But now, with plans made prior to the Olympics being tossed onto scrapheaps around the world due to the coronavirus pandemic, Matsumoto and Suzuki, too, found themselves looking at a blank page.

After the timing meet, Matsumoto took a break to push the reset button and did not resume training until mid-April.

“I guess this is not going to be the year I win an Olympic gold medal after all,” he said.