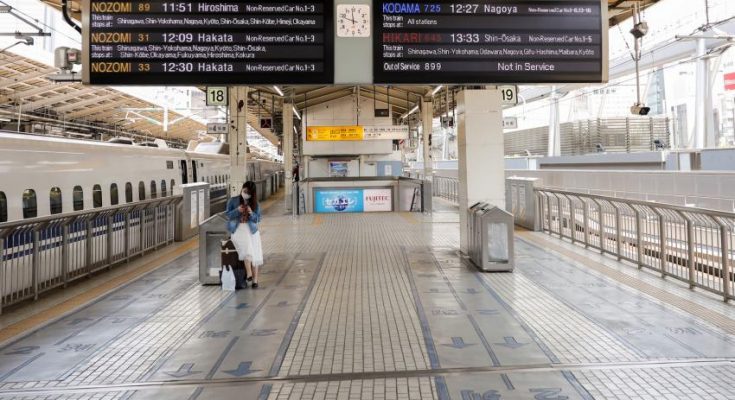 TOKYO – The number of passengers on shinkansen and limited express trains during this year’s Golden Week holidays plunged 95 percent from a year earlier amid the coronavirus outbreak, data from six major railway companies showed Thursday.

The outlook for passenger numbers on the trains looks grim after the government decided Monday to extend the nationwide state of emergency until the end of May, from its previously scheduled expiration on Wednesday, to reduce infection rates.

The operators of the Tokaido, Sanyo, and Kyushu shinkansen lines, which connect popular tourist destinations such as Tokyo, Kyoto, Osaka and Fukuoka, will cut services by 20 to 30 percent starting Monday. The three lines saw passenger numbers decline 93 to 95 percent during the roughly weeklong holiday period.

A total of 916,000 passengers took shinkansen and major limited express trains from April 24 to May 6, sharply down from 17.12 million in the same period last year amid stay-at-home and business closure requests under the state of emergency. Last year the holiday was extended to 10 days to celebrate the imperial succession.

People usually return to their hometowns or take trips during the long holiday period from late April to early May.

The Hokkaido, Akita and Yamagata bullet trains as well as the section of the Hokuriku Shinkansen Line operated by West Japan Railway saw the sharpest fall in passenger numbers of 97 percent, while the Kyushu shinkansen logged a drop of 93 percent, the lowest decline.

The number of passengers on the limited express service connecting Narita airport, east of the capital, and the metropolitan area plunged 99 percent during the Golden Week holidays.

Meanwhile, the Ministry of Land, Infrastructure, Transport and Tourism said traffic on expressways between April 25 and May 6 dropped 70 percent from the holiday period last year.

Tailbacks of 10 kilometers or longer were not seen on major expressways, according to four expressway operating companies.© KYODO