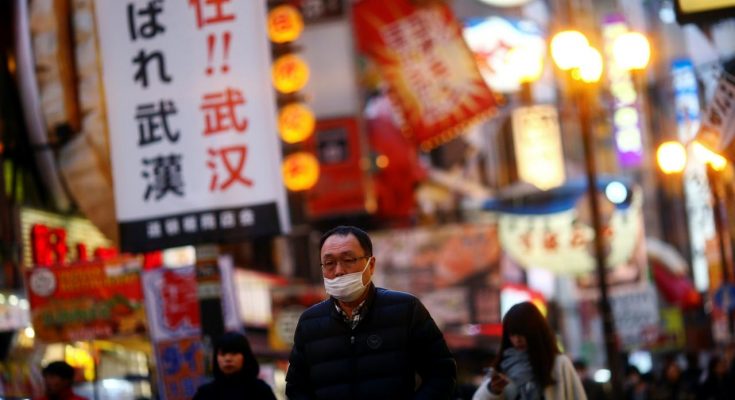 TOKYO – Japan’s household spending plunged in March and service-sector activity shrank at a record pace in April, reinforcing expectations that the coronavirus pandemic is tipping the world’s third-largest economy into deep recession.

Overtime pay — a barometer of strength in corporate activity — also plunged at a record pace in March, data showed, a sign companies were hit by shrinking business even before the government announced a state of emergency in early April.

The weak readings make it a near certainty the economy suffered a second straight quarter of contraction in January-March, the technical definition of a recession, and was on track for a deeper decline in the current quarter as the health crisis kept shoppers home and businesses closed.

“Even without the virus, Japan’s economy was very weak due to the hit from last year’s sales tax hike. The pandemic has completely destroyed any chance of a recovery,” said Taro Saito, executive research fellow at NLI Research Institute.

“The economy may rebound somewhat in July-September but won’t return to pre-coronavirus levels for the rest of this year,” said Saito, who expects the economy to contract an annualised 30% in the current quarter.

Household spending slumped 6.0% in March from a year earlier following a 0.3% fall in February, marking the biggest drop in five years, government data showed on Friday.

The decline, a tad smaller than a median market forecast for a 6.7% fall, was due largely to plunging demand for travel, clothing and eating out as the government asked citizens to refrain from going out and some businesses to shut down.

There were some winners with firms that provide catering for people at home seeing increased business.

Spending on pasta jumped 44% as people cooked at home more often, while purchases of gaming consoles more than doubled as school closures kept children housebound. However, those increases were not enough to make up for the plunging demand for other items.

The data will likely drag on preliminary first-quarter gross domestic product (GDP) data due on May 18. Analysts polled by Reuters expect Japan’s economy to contract an annualised 4.6% in the January-March period.

Many analysts expect the economy to plunge by at least 20% in the current quarter, piling pressure on the government to top up an already massive $1.1 trillion stimulus package to cushion the economic blow from the pandemic.

With infections in Japan exceeding 15,000, the government extended a state of emergency on Monday through to the end of the month, pressuring companies to shut down factories and stores longer than previously expected.

Other data paint a similarly bleak picture on the outlook.

Japan’s services sector shrank at the fastest pace on record in April as a huge blow to demand from the outbreak hurt business activity, a business survey showed.

Inflation-adjusted real wages fell in March for the first time in three months as overtime pay slumped 4.1% from a year earlier, falling at the fastest pace on record.

Tom Learmouth, an economist at Capital Economics, expects Japan’s job market to worsen sharply in coming months and push down wages of retailers hit by the pandemic.

“Looking ahead, leading indicators are pointing towards a spike in the unemployment rate – we think it will climb to 4.2% towards the end of this year,” he said. “Corporate profits are no doubt falling fast so total pay will be dragged down further by a slump in bonus payments.”

The health crisis hit an economy that already suffered a contraction in the final quarter of last year due to the hit on consumption from an October sales tax hike.